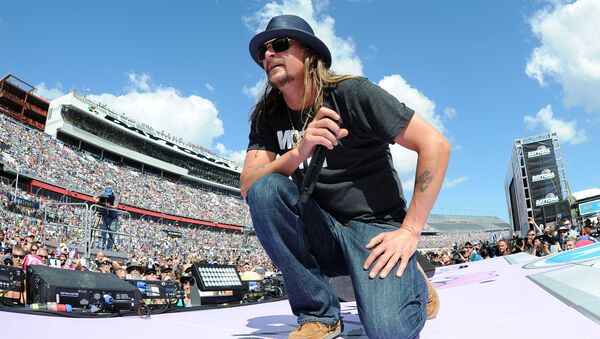 © AP Photo / Jeff Daly/Invision
Subscribe
Kid Rock, one of America's most loved redneck rockstars, has teased a run for the US Senate since July. At a gig in Michigan, he offered the clearest indication yet of his political ambitions.

Kid Rock, the redneck wildman of popular American music, has been teasing a run for Michigan's US Senate seat in 2018 for some time. At a September 6 gig in Grand Rapids, he took to the stage to voice his political ambitions — although concrete confirmation of his candidacy remained elusive.

​As the Detroit-born star prepared to tear into a rousing rendition of "You've Never Met a Motherf***** Quite Like Me" — one of his trademark songs — Rock (real name Robert James Ritchie) issued an impromptu stump speech of sorts from an onstage podium, flanked by a pair of flag-waving female dancers.

The singer applauded single mothers, but bemoaned those who "can't even take care of themselves but keep having kid after kid." 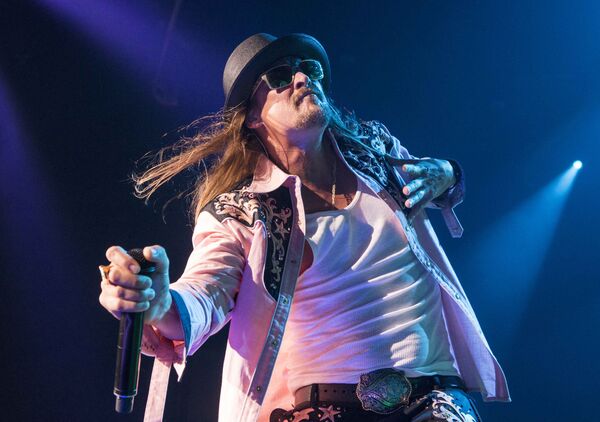 He blasted critics who accuse him of racism because he's "not politically correct," and think they have to remind him "black lives matter" — and underlined his anti-racism with a strident, profanity laden couplet.

I am starting to see reports from the misinformed press & the fake news on how I am in violation of breaking… https://t.co/id48mIEXAi

​The crowd raucously cheered most of Rock's positioning lines — the sea of concertgoers was awash with "Kid Rock for US Senate '18" shirts, and many who didn't already come so bedecked picked up their own at the venue's merchandize stands. Several "Make America Great Again" caps could also be seen dotted around the throng.

Accusations of racist affinities have dogged Rock in recent years, generally over his use of the Confederate flag onstage, and specifically his vocal support of Donald Trump both as candidate and president.

The National Action Network's Detroit chapter intends to picket Rock's Detroit shows, and had called on Olympia Entertainment to cancel the string of concerts.

​Dismissed by many as a publicity stunt, or a hoax, many conservative pundits in the US have expressed delight at Kid Rock's apparent political aspirations — and in July, a poll placed him ahead of incumbent Debbie Stabenow in a hypothetical head-to head match-up, if it were held now — his support stood at 30 percent to the serving Senator's 26 percent, while 44 percent of voters remain undecided.

Kid Rock for President of the USA?

​If he does decide to run, Kid Rock's recorded oeuvre would provide any opponents with an extensive catalog of controversial statements with which to attack him — over the course of Ritchie's three-decade-long career, he has written a panoply of songs about drug use, alcohol abuse and sexual exploits, often with prostitutes and strippers.

'American Bad A**'... Senator? Kid Rock Surges Ahead in Race for Michigan Senate
Moreover, outside his recorded work, Kid Rock has also starred in a sex tape, been arrested for drunkenness and assault on several occasions, and suffered the indignity of a very public divorce from former Baywatch star Pamela Anderson.

Almost every interview that has been conducted with Ritchie has been rife with incendiary statements too.

Still, Kid Rock's popularity isn't a matter of debate — he has sold tens of millions of albums, and used his wealth to fund charities with seven-figure sums, help local businesses, perform at philanthropic events, and keep ticket prices to his concerts low (around US$20) to ensure poorer fans can attend his gigs.

If Ritchie does decide to throw his famed fedora into the ring, he could well capitalize on Trump's success, connecting with the President's winning coalition of conservative, pro-populist working class voters.