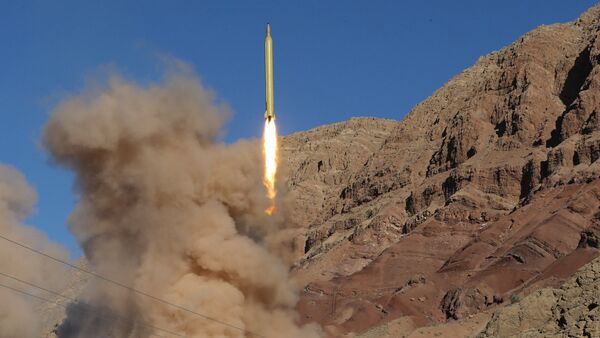 Iran has responded to US sanctions by increasing the funding of its missile program, Vladimir Sazhin, an expert on Mideast affairs told Sputnik, adding that over recent decades Tehran's rocket industry has made considerable progress.

Tehran has made considerable progress in missile production by creating over 20 types of rockets, Vladimir Sazhin, expert on Middle Eastern affairs at the Institute for Oriental Studies of the Russian Academy of Sciences, told Sputnik, adding that the US efforts to bring Iran's rocket program to a halt through tough sanctions have proven futile.

"Over the recent years Iran has purchased, modernized and designed numerous series and various modifications of short-range missiles including tactical and operational tactical missiles," Sazhin told Sputnik Iran. "However, the emphasis was placed on the creation of ballistic missiles capable of striking targets at great distances."

The expert emphasizes that Tehran's missile program has been rapidly developing for more than three decades.

Iran to Continue Its Missile Program Despite International Pressure
The Iran-Iraq war of 1980-88 became the trigger for the program: It was then that Tehran bought dozens of Soviet-designed Scud-B and Scud-C missiles from Libya. After necessary modernization these short-range rockets were named Shahab-1 and Shahab-2, respectively.

The expert notes that Tehran also planned to develop the Shahab ballistic missiles, which would be capable of travelling up to 5,000-6,000 km. However, according to Sazhin, Iran's capabilities of further developing the Shahab missile platform have been largely exhausted to date.

Nevertheless, Iran may use its expendable launch systems, such as Safir-2, capable of carrying a payload of up to 100 kg into space, for military tasks, the expert assumed.

Anti-Iran Sanctions: 'US Tool to Provoke Tehran Into Ripping Nuclear Deal Up'
The striking range of this missile is 2,000 km, Sazhin explains, adding that by reducing the weight of the head part of the rocket to 500 kg the Sajil's operational range could be increased to 3,000 km.

"There is an evident tendency for the Islamic Republic of Iran (IRI) to switch from the production of liquid-fuelled rockets to solid-fuelled types," Sazhin underscores, clarifying that this transition is significantly increasing Iran's combat readiness.

The expert pointed out that Iran's missiles are "mobile and perfectly adapted" to operate in various conditions; they are carefully disguised and protected by the country's air defense system.

"The missile potential of Iran is a serious threat to potential adversaries of Iran. This, of course, worries them" Sazhin emphasizes.

Iran Counters US Sanctions With New War Spending, Warships to Atlantic Ocean
According to the expert, the sanctions policy adopted by Washington towards Iran has proven futile: Following Donald Trump's signing of the recent package of sanctions against Iran, Russia and North Korea in early August, Tehran has only bolstered its missile program by increasing its funding from $300 million to $520 million.

Although American policymakers insist that Tehran's missile program is being developed in violation of the Joint Comprehensive Plan of Action (JCPOA), also known as the Iran nuclear deal, the crux of the matter is that the JCPOA doesn't contain any restrictions against missile tests, Sazhin notes.

He adds, however, that UN Resolution 2231 calls upon Iran not to undertake any activity related to the development of nuclear weapon delivery systems.

In this regard, the expert notes, Iran's missile program could potentially prompt concerns when the JCPOA agreement expires — in the next 10-15 years. However, according to Sazhin, the issue of the IRI missile program is subject to discussion and decision only in the format of international negotiations with Iran and with the approval of the UN.

"It is inefficient and counterproductive to exert brutal pressure on Iran because of its missile program," Sazhin stressed, adding that it is necessary to adopt a comprehensive and pragmatic approach to solve the issue.