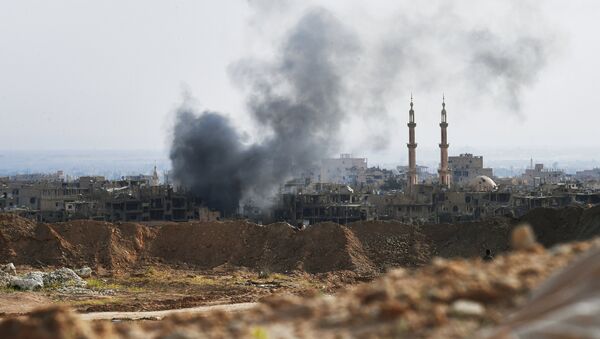 A military and diplomatic source has told Sputnik that a US Air Force plane had evacuated Daesh (ISIS, banned in Russia) field commanders from Deir ez-Zor. The US-led coalition has denied the allegations.

"Amid successful actions by Syrian government troops in the eastern part of Syria in late August, a number of field [Daesh] commanders backed by US special services, had been promptly evacuated from Deir ez-Zor to safer regions in order to use their experience in other directions," a military and diplomatic source has told Sputnik.

Syrian Combat Engineers Completely Demine Deir ez-Zor Supply Route - Source
The source said that the first such extraction took place on August 26, a "US Air Force helicopter" had evacuated 2 Daesh field commanders of "European origin" with members of their families from an area located to the north-west of Deir ez-Zor at night.

According to his data, two days later, US choppers transfered 20 Daesh field commanders and militants close to them from an area south-eastern of the city of Deir ez-Zor to northern Syria.

"Militants who lost their commanders due to the Americans, usually tend to cease organized actions, leave their positions, join other [Daesh terrorist] units or one by one flee. This eventually contributes to the success of the offensive by the Syrian government troops in eastern Syria," the source said.

When contacted by Sputnik, the Combined Joint Task Force of the Operation Inherent Resolve’s press office has called the allegations "false."

Syrian Opposition Thanks Russia for 'Gift of Peace' as Deir Ez-Zor Siege Lifted
On Tuesday, the Syrian army assisted by Russia managed to finally break the three-year Daesh siege of the city of Deir ez-Zor, with food and ammunition only being delivered to the city by air, while helicopters from the city of Qamishli had been evacuating the wounded and delivering essential supplies to the city's population.