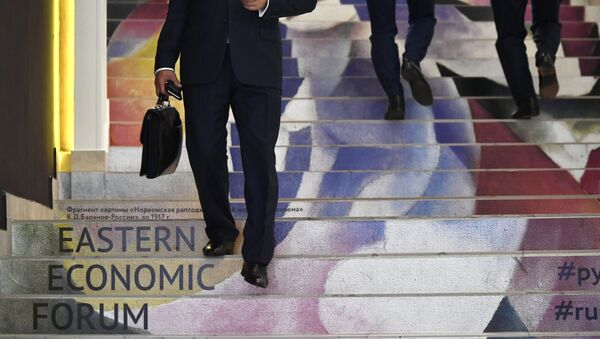 The founder of the Canada Eurasia Russia Business Association said the current time was the best to invest in Russia's economy, adding that Canadian businesses were interested in working with Russia across a variety of spheres.

VLADIVOSTOK (Sputnik) — Nathan Hunt, the founder of the Canada Eurasia Russia Business Association (CERBA), told Sputnik on Thursday that the best moment to invest in Russia's economy was right now due to the size of its market and undervaluation of the country's assets.

"Russia is especially attractive [for investment] now for several reasons. The first reason is the Eurasian Economic Union, the fact that the Russian market which is already large is becoming even larger by the addition of other countries. Another reason being the economic downturn of assets now in Russia I think are underpriced. And companies that come with capital they find them for a bargain, for a really low price. So it has never been a better time to invest in Russia," Hunt, who is also the chairman of the association's Moscow Chapter Board of Directors, said on the sidelines of Eastern Economic Forum.

Canadian businesses are interested in working together with Russia in a series of industries, particularly mining, oil and gas, transportation and infrastructure development.

"Canadian companies will try to concentrate their efforts in areas where we are experts. Right now these areas are natural resources development, corporate social responsibility, transportation and aerospace and potentially other sectors like agriculture. So there is great potential in other sectors but certainly the natural resources sector that includes mining as well as oil and gas, these sectors are the most important for Canadian companies," Hunt, who is also the chairman of the association's Moscow Chapter Board of Directors, said on the sidelines of the Eastern Economic Forum (EEF).

The official added that a number of Canadian companies are interested in establishing business ties in the Asian part of Russia and could use the port city of Vladivostok to expand their business activities.

"Vancouver can be viewed as a gateway to all of North America in the same way Vladivostok is the gateway to all of Eastern Russia. And Canadian companies understand that. Many of the same Canadian companies that do business in North America are trying to reverse that and to create business relations that focus on Asia, that focus on the Asian part of Russia," Hunt clarified.

Hunt said the Canadian business had technologies, which were useful for Russia, for example in offshore gas industry, but Ottawa's sanctions hindered cooperation with Moscow in this sphere.

"We are affected by the Canadian sanctions. We have technologies in Canada that can be very useful for the Russian offshore gas industry for instance. And that is an area where the current sanctions forbid us from operating," Hunt, who is also the chairman of the association's Moscow Chapter Board of Directors, said on the sidelines of Eastern Economic Forum (EEF).

According to Hunt that the measures taken by Russia in response to the sanctions also had a negative impact on the agricultural trade between the two nations.

Putin Holds Discussion With Foreign Businesses at Russia’s Far Eastern Forum
"[Russian] counter sanctions had a much a larger impact in Canada than they had on the USA. Canadian trade with Russia was almost a third of the agricultural sector, that business is all but dead now because of counter sanctions," Hunt added.

In 2017, Moscow and Ottawa celebrated the 75th anniversary of their establishment of diplomatic ties. The economic ties between Moscow and Ottawa are regulated by a number of bilateral agreements reached in the 1990s and the early 2000s, according to the Russian embassy in Canada.