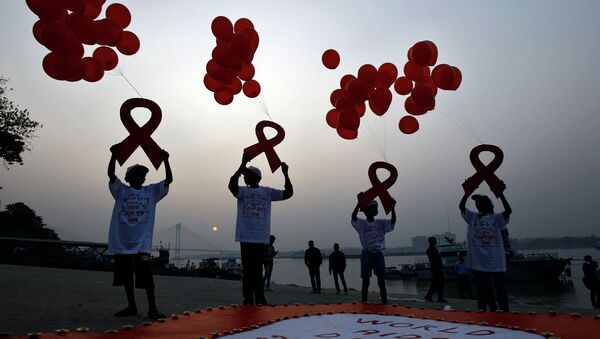 AIDS which affects lives of millions around the globe every year is a silent killer that has been around for decades. Scientists have been unable to find a cure so far, although there are drugs that can prolong the lives of patients by many years. Luiz Loures from UNAIDS believes that soon the epidemic will cease to exist completely.

Since the beginning of the AIDS pandemic, 76.1 million people have contracted HIV and 35 million have died of AIDS-related illnesses, including 1 million in 2016.

Luiz Loures, Deputy Executive Director of UNAIDS in an interview with Sputnik said that AIDS could be eradicated within the next fifteen years.

"I am convinced that we will be able to put an end to AIDS by 2030. The number of cases of HIV infection and mortality from this disease is steadily declining all over the world. Especially impressive results have been achieved in South Africa,” he said.

However, this does not mean that we should relax. Despite the generally positive statistics, in some regions of the world this disease continues to spread rapidly, including in Eastern Europe.

Recovery of South African Miracle Child Raises Hope of Cure for Deadly HIV
As for the Asia-Pacific region, it is the second largest in the world in terms of the number of HIV carriers.

He further said that most of the time HIV carriers are homosexuals, workers in the sphere of intimate services, as well as people suffering from drug addiction.

“Today, science has made a very serious progress in the fight against AIDS. But not everything depends on the drugs. The fear of HIV vectors before conviction and other psychological factors lead to people not seeking help. This is perhaps the main reason why the situation is still far from ideal,” Loures said.

The fight against the spread of HIV was only one of the topics discussed in the framework of the Eastern Economic Forum.

The deputy director said that during the forum strategies to combat the spread of the Zika virus, Ebola and the so-called Asian flu were also discussed.

“These diseases pose a serious threat to the countries of the Asia-Pacific region. In this sense, the vast experience of fighting the HIV virus is of great value, since it can be used to combat these diseases,” he said.

Loures further said that today there is not a single country that can consider itself completely protected from viruses. Therefore, the topics discussed at the economic forum are relevant to the entire world community.