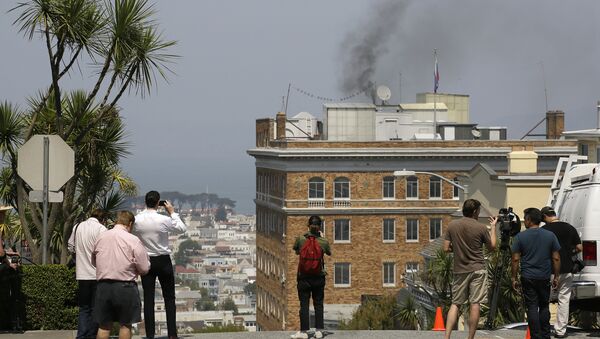 Moscow shed light on details of the US law enforcers' searches inside Russian diplomatic facilities.

MOSCOW (Sputnik) — There is no excuse for outrageous actions by US authorities to seize Russian diplomatic facilities as they turned into "unceremonious invasion" of the premises, Russian Foreign Ministry's spokeswoman Maria Zakharova said Wednesday.

"We paid attention to the inappropriate attempts by US officials to justify the unceremonious actions to seize Russian diplomatic properties on September 2 aimed at giving them the appearance of 'legitimacy.' However, there can be no justification for such outrageous actions," Zakharova said in a commentary posted on the ministry's website.

"What the US State Department calls 'inspections' was in fact an "illegal invasion" in the Russian diplomatic premises, accompanied by actual searches from basements to attics," Zakharova stressed, adding that the searches were conducted without Russian representatives' presence.

She said that US "plainclothed persons" continue to be seen watching around the Russian diplomatic facilities.

US Searches for Explosives in Russian Trade Mission in US? 'It's Ridiculous!'
The US State Department said last Thursday that Washington demanded that Moscow close down its consulate general in San Francisco and two other diplomatic entities in New York City and Washington, DC by Saturday. The Russian Foreign Ministry said that US actions constituted a violation of international law, including the Vienna convention on diplomatic and consular relations.

A few days later, the US conducted searches in the buildings of the Russian General Consulate in San Francisco and its trade mission in Washington. Russian Deputy Foreign Minister Sergey Ryabkov commented on the move saying that the searches conducted by the United States at the Russian diplomatic properties on US soil were outrageous and constitute aggressive violations of international law.

In the latest development of the issue, Russian President Vladimir Putin said on Tuesday he would instruct the Foreign Ministry to go to court over the situation with Russian diplomatic property in the United States. Foreign Minister Sergei Lavrov informed his US counterpart Rex Tillerson of Moscow's intention to bring the issue of Russian diplomatic property seizure to court.