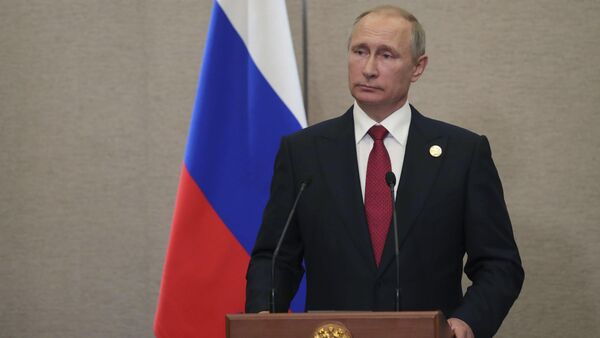 The two leaders have held a meeting at the Third Eastern Economic Forum that is taking place in Vladivostok on September 6-7.

Some 4,200 people have arrived in Vladivostok to take part in the forum. A total of 723 business representatives from more than 50 countries including Australia, Canada, China, India, Japan, the United Kingdom and the United States, will be taking part in the event.

"Today, Mr. President and I agreed to intensify the activity of joint investment and financial platforms with a volume of capital of $1 billion, to form a portfolio of promising projects, primarily in the Russian Far East, while using the opportunities of the advanced development territories and the free port of Vladivostok," Putin said.

"We also noted with satisfaction the successful development of cooperation in the energy sector. South Korean companies participate in the Sakhalin-1 and Sakhalin-2 projects, and the issue of increasing LNG purchases is being worked out," Putin said at the Eastern Economic Forum (EEF) following talks with South Korean President Moon Jae-in.

Russia and South Korea also signed a batch of agreements after the meeting, including an intergovernmental accord on the establishment of an encrypted communication system between the two states and a memorandum on the construction of a fish-processing logistical complex in the Far East.

The two parties have signed a memorandum of understanding (MoU) between the Russian and South Korean Industry ministries providing for South Korea's participation in the international industrial exhibition INNOPROM-2018 as the partner country. MoUs were also signed between Russia's Roscongress Foundation and Korea Trade-Investment Promotion Agency (KOTRA), and between Far East and Baikal Region Development Fund and the Export-Import Bank of Korea (Korea Eximbank).

In addition, an MoU was signed by the Russian Economic Development Ministry, and the Korean Ministry of Science and Information and Communications Technology (ICT).