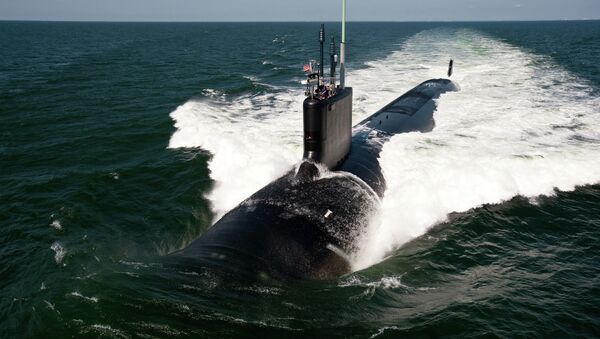 © US Navy / Chris Oxley
Subscribe
According to the Pentagon, a proposal to increase the size of the US Navy to 355 ships would be heavily based on expanding its submarine fleet, with the new Virginia-class boats coming with underwater drones, too.

The plan to expand the fleet by 81 vessels stipulates the construction of 16 to 19 new attack subs, signaling that the drone attachment may become more important to the Navy’s overall strategy.

General Dynamics Electric Boat will help the US Navy integrate commercially available underwater drones as part of an eight-year agreement, Scout reports. “The commercial sector typically leads the military in fielding cutting-edge electronics, so it makes sense to leverage what’s available in the marketplace in support of naval needs,” the Lexington Institute’s Loren Thompson told the news outlet.

Drones were first deployed from US submarines in 2015 as part of an effort to develop more robust underwater capabilities. “America’s superiority in undersea warfare results from decades of research and development, a sophisticated industrial base, operational experience and high-fidelity training,” Bryan Clark, senior fellow with the Center for Strategic and Budgetary assessments, reported in 2015. “This superiority, however, is far from assured,” Clark noted in a study called “The Emerging Era in Undersea Warfare.”

Clark concluded that "the US Navy must accelerate innovation in undersea warfare by reconsidering the role of manned submarines and exploiting emerging technologies to field a new ‘family of undersea systems.'"

General Dynamics has received multiple contract awards to improve and maintain the Virginia-class fleet. On August 19, the company snagged a $40 million contract to redesign the submarines’ main propulsion mechanism. The same month, the government granted the defense giant $115 million for maintenance and support-related work.