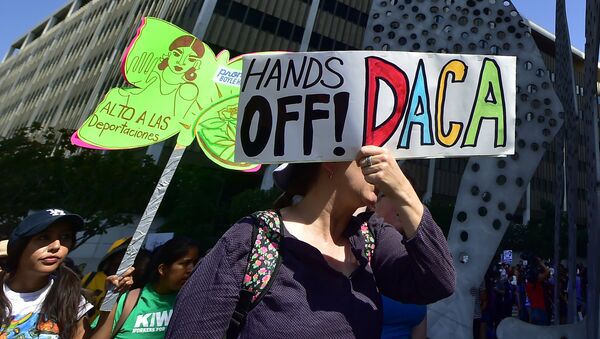 © AFP 2023 / FREDERIC J. BROWN
Subscribe
International
India
Africa
The United States has shut down the Deferred Action for Childhood Arrivals (DACA) program, designed to protect undocumented immigrants who arrived in the country as children from deportation.

The US Attorney General Jeff Sessions has announced the termination of the DACA program for immigrant children he called "an open-ended curcumvention of immigration laws."

"I’m here today to announce that the program known as DACA that was effectuated under the Obama administration is being rescinded," Sessions stated.

The termination of DACA program will come into force on March 5, while no new requests will be accepted after October 5.

A senior DHS official told reporters that the United States Citizenship and Immigration Services (USCIS) will adjudicate renewals for DACA until October 5. The DHS said USCIS will adjudicate all requests for renewal for current DACA program beneficiaries on an individual, case by case basis.

New York State to Sue Trump If He Scraps Young Immigrants DACA Program
As related to current DACA holders, the authorities will not terminate the granting of previously issued actions, according to the DHS.

The immigration agency aims to close all pending applications associated with the DACA program in the six-month window, the DHS said. Moreover, the DHS said it would continue to focus on illegal criminal aliens and those individuals who have been previously deported from the United States.

Trump's predecessor, Barack Obama, established the DACA program via an executive order in 2012, allowing immigrants who entered the country illegally as minors to receive renewable two-year deferrals on deportation proceedings, as well as permits to work in the United States.

President Donald Trump has questioned whether DACA was constitutional given the program's broad categorical criteria and impact on national security. After reports emerged that Trump aims to cancel the program, the move was criticized by the US Democrats and even some members of the Republican party. The idea also prompted New York's Governor Andrew Cuomo say that the state will sue Trump if the decision is made.

Nearly 1 Million Immigrants Vulnerable as Trump Ponders Fate of DACA
This is not the first decision by the new US administration related to the immigration to the country. Trump's two immigration orders repeatedly blocked by US courts have caused mass criticism in the country and abroad, as well as led to several protests. However, the second version of the legislation later entered into force due to a court ruling.

On January 25, Trump issued an executive order temporarily blocking nationals from Iran, Iraq, Libya, Somalia, Sudan, Syria and Yemen from entering the United States for 90 days, and suspending refugee admissions for 120 days. The implementation of the order was restricted by a US federal court on February 3.

On March 6, Trump introduced a revised version of the temporary travel ban, but it too was blocked by a federal court ruling nine days later. A US federal judge in Hawaii indefinitely extended on March 30 a court order blocking Trump's new travel ban. On June 12, the Ninth Circuit Court of Appeals upheld the ruling of a district judge in Hawaii.