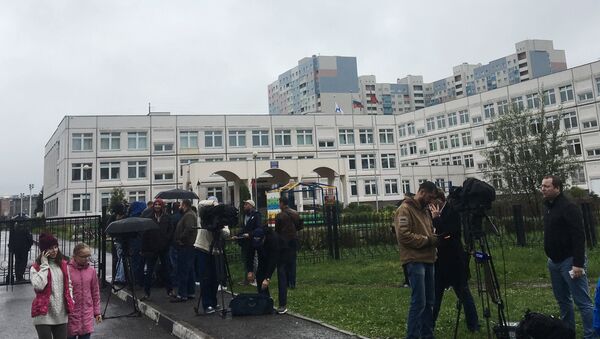 © Sputnik
/
Go to the photo bank
Subscribe
A student shot an air gun inside a school in the Moscow region, leaving several people injured.

MOSCOW (Sputnik) — Four people were injured in the panic that ensued after a student shot an air gun inside a school. The student, who also tried attacking the teacher with an axe, and then exploded fireworks in the school building, has been detained by police.

"Teenagers were frightened and three jumped out of the window, according to preliminary data, one boy had a fracture, two had bruises, the teacher received an open craniocerebral injury. At present, the lives of those injured are not in danger," the Russian Investigative Committee's Moscow region department said.

The shooting incident in Ivanteyevka in the Moscow Region did not result in any fatalities, local authorities said Tuesday.

"Four people have been hurt, a teacher and three students… No one has died," the local Interior Ministry service told Sputnik, adding that the three students were hurt when jumping from a window.

The student, who is believed to be in the 9th grade, targeted his teacher. The teacher received a head injury in a shooting incident at the school; her condition was satisfactory after hospitalization, Russian Investigative Committee spokeswoman Svetlana Petrenko said later in the day.

According to the prosecutor's office, during a computer science lesson on Tuesday, the attacked the teacher with a hatchet, struck her on the head, and then began to fire homemade firecrackers in the classroom and opened fire from pneumatic weapons.

A case into hooliganism has been opened, according to investigators.

Bloody Mass Shooting Spree in Russian Village Leaves 9 Dead
Shooting incidents in schools happen rarely in Russia as a civilian over 18 years old needs to obtain a firearms licence after attending gun-safety classes and passing a federal test and a background check to acquire small arms. No official statistics in open sources on the number of such incidents in Russia has been available.

Moscow Region children's rights commissioner Ksenia Mishonova commented on the incident, saying that she plans to hold a meeting with Russian law enforcement agencies to discuss school security in the wake of the school shooting in Ivanteyevka.

"Security is of utmost importance right now, what was school security doing at the time. It should be impossible to take arms into a school and use them inside. What is more, we plan to hold a meeting with all our law enforcement agencies on preventing similar incidents in the future and to review school security service issues in our schools," Mishonova told Sputnik.