All Russian Diplomatic Missions in US Working 'as Usual' - Embassy 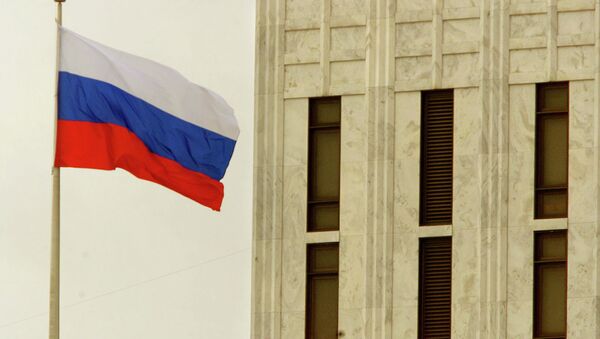 The Russian embassy in the US commented on the state of affairs after Washington demanded that Moscow close down its consulate general in San Francisco and two other diplomatic entities in New York City and Washington.

WASHINGTON, September 5 (Sputnik) — All the diplomatic missions of the Russian Federation in the United States are operating normally despite the announced closures by the State Department last week, the embassy’s press office told reporters on Tuesday.

"Despite another serious test for the Russian-American relations, all our official representations in the USA continue to work as usual," the embassy stated.

Russia is still considering where it will place the personnel of the General Consulate in San Francisco after US authorities closed the facility, a spokesman for the Russian Embassy in Washington, DC Nikolai Lahonin said in a statement.

US Searches for Explosives in Russian Trade Mission in US? 'It's Ridiculous!'
"At this time, Russia is still deciding where the personnel of the closed consulate in San Francisco will be reassigned," Lahonin stated on Tuesday.

"Today, Ambassador Antonov conveyed gratitude and support to the staff of the institutions, which became objects of illegal actions by the US authorities (especially the Consulate General in San Francisco), for their restraint and professional behavior," Lahonin said. "Solving all the issues that unexpectedly arose due to the urgent evacuation required extraordinary efforts. And the Russian diplomats fulfilled their duty."

US Searches at Russian Diplomatic Property Outrageous - Moscow
Lahonin noted that the embassy has received dozens of comments from Russian compatriots as well as US citizens perplexed by the actions of American authorities who express solidarity with colleagues and hope for improvement in US-Russian relations.

The US State Department said last Thursday that Washington demanded that Moscow close down its consulate general in San Francisco and two other diplomatic entities in New York City and Washington, DC by Saturday.

Earlier in the day, Putin said he would instruct the Foreign Ministry to go to court over the situation with the Russian diplomatic property in the United States. Russian Foreign Minister Sergei Lavrov informed US Secretary of State Rex Tillerson of Moscow's decision to bring the issue to court.