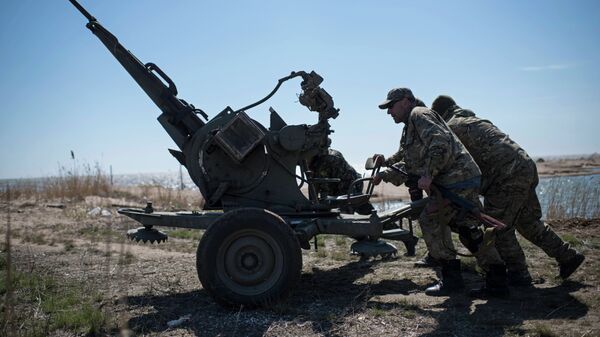 Russian President Vladimir Putin warned the United States against lethal arms deliveries to Ukraine, saying that it might worsen the situation in the country.

Possible deliveries of US lethal weapons to Ukraine will not change the situation, but this may lead to an increase in the number of victims, provoke the use of military force in other territories, Russian President Vladimir Putin said during a press conference on the results of the BRICS summit on Tuesday.

"This [the supply of lethal weapons to Ukraine] is the sovereign decision of the United States as to whom they sell arms or supply them to for free, and of the country that is the recipient of this aid. We cannot influence this process in any way. But there are general international rules and approaches — the supply of weapons to the conflict zone does not favor the pacification, but only aggravates the situation," Putin stated.

According to him, "there is one more thing to pay attention to — who is encouraging such ideas".

"This is because the self-proclaimed republics have enough weapons, including those seized from the opposing side, from nationalist battalions. And if American weapons enter the conflict zone, it is difficult to say how the proclaimed republics will react — maybe they will send the weapons they have to other zones of conflict that are sensitive to those who create problems for them,"  Vladimir Putin warned.

On Thursday, during his visit to Kiev in honor of Ukraine's Independence Day US Secretary of Defense James Mattis said that the US was "actively reviewing" the supply of "defensive lethal weapons" to Ukraine.

Russian Edition of Oliver Stone's Putin Interviews to Be Released Tuesday
In recent weeks, US officials have floated Javelin anti-tank missiles and anti-aircraft weapons among the kinds of "defensive" weapons that the US may send Kiev. At his press conference, Mattis confirmed that the US has already agreed to supply the country with an additional $175 million worth of non-lethal equipment and supplies, for a total of $750 million over the last three years.

Russian President Vladimir Putin also said that he would order the Foreign Ministry to submit a resolution on security of the OSCE mission in Ukraine to the UN Security Council (UNSC) if certain conditions are met.

"If to fulfill all the conditions, then, I think, it would contribute to the settlement of the problem in Ukraine's southeast. The [Foreign] Minister [Sergey Lavrov] is currently here, so it is the order to the foreign ministry to introduce the relevant resolution to the UNSC," Putin told reporters.

According to the Russian leader, the list of conditions include the ensuring of the OSCE staff's security, the presence of the staff only at the disengagement line, pullout of heavy military equipment and involvement of the leadership of the self-proclaimed republics of Donbass to the process.

Putin added he supported the idea of sending peacekeepers to Ukraine in order to ensure the security of the Organization for Security and Co-operation in Europe (OSCE) mission in the crisis-torn region of Donbass.

"I do not see anything bad in it. I have repeatedly stated that I also support the idea of arming the OSCE mission. However the OSCE itself refuses to provide its staff with arms, because it does not have both relevant staff and experience for such activities. In this context I consider the presence of UN peacekeepers, even not peacekeepers, but people who would ensure security of the OSCE mission, quite appropriate. I do not see anything bad in such developments. I consider that it would contribute to the settlement of the problem in Ukraine's southeast," Putin said.