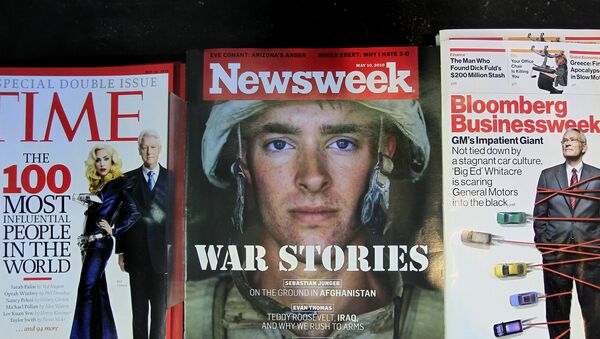 © AP Photo / Charles Krupa
Subscribe
Online publication Newsweek upped the ante in explosive rhetoric Sunday by suggesting the Tsarnaev brothers, responsible for the 2013 Boston Marathon terror attack, were operating on behalf of Moscow – even though Russian security agencies tipped off the FBI and CIA that Tamerlan Tsarnaev and his mother presented imminent security risks.

Since evidence is apparently optional for arguments published by Newsweek, this time, an author featured in the publication seems to have looked out onto the world, found it bloody and complicated, and decided to pin any old recent disaster on Russia.

The United Kingdom’s Brexit vote, the Syrian refugee crisis in Europe and the rise of right-leaning politicians can all be traced back to one single, remarkably effective cause: Moscow. "Russia must accept a share of responsibility" in all of these events, Andrei Kovalev wrote in a September 3 op-ed for Newsweek.

As for the Boston bombing, he asks, "Did the emigrants, the brothers Tsarnaev, of Chechen nationality, responsible for the Boston attack, act on their own initiative? It seems most unlikely."

Kovalev worked as a diplomat in the Soviet Union under Mikhail Gorbachev as well as for Russian presidents Boris Yeltsin and Vladimir Putin. "Sometimes I am reproached for attributing to the Kremlin too much influence in the world," he confessed in the article.

In reality, Russian security services sent warnings to multiple US agencies explaining that Chechen-American Tamerlan Tsarnaev had “changed drastically since 2010” and that he and his mother were adherents to "radical Islam" long before the Boston attack occurred. "The Russians were concerned that mother and son were very religious and strong believers, and they could be militants if they returned to Russia,” a US official told the New York Times in 2013.

"You have Russian intelligence services contacting two agencies without our federal government responsible for our national security, the FBI and CIA … they tell us, 'We believe you have a radical Islamist in your midst,'" South Carolina Senator Lindsey Graham explained at the time.

Newsweek’s readers quickly pointed out that the claim that Russia had orchestrated the Boston Marathon terror attack originated with Louise Mensch, a former UK member of Parliament who shot to fame as a darling of the Russia-bashing wing of the Trump resistance, but, given her penchant for calling literally any critic a Russian spy, has somewhat fallen from favor. Mensch was recently embarrassed by the Guardian for broadcasting information around the internet that was made up by a hoaxer but supported her "Russians are behind it all" agenda. As Radio Sputnik’s Fault Lines host Garland Nixon joked, "pretty much everybody that dies, the death was related to Vladimir Putin," in Mensch’s world.

​When faced with accusations of spreading deleterious and false information, Mensch doubled down and said the Guardian was being operated by Russian security agency spies, too. The former MP alleged that one of her collaborators, Claude Taylor, had been duped, but that her reporting remained free of falsehoods.

Mensch has nevertheless been published by the New York Times, the Guardian and the Sun in addition to making TV appearances on MSNBC and Bill Maher’s "Real Time" show. A running list of her baseless conspiracies includes Facebook CEO Mark Zuckerberg acting as a mole and Putin ordering the assassination of Breitbart News founder Andrew Breitbart to pave the way for Steve Bannon to take the reins of the organization.

Newsweek, too, has gotten quite good at getting things wrong. It previously deleted two slanderous articles attacking a former Sputnik News editor following a defamation lawsuit settlement levied by now-attorney and former Sputnik weekend editor William Moran. During the scandal, in which the young lawyer represented himself in legal proceedings alleging slander against himself and Sputnik as a whole, Newsweek Editor-in-Chief Jim Impoco was fired. The February ouster was first reported by Politico.

Newsweek was forced to settle with Moran in July. "I brought this case before I was admitted to the bar and was up against the talented attorneys at mega law firm Pepper Hamilton," Moran said in a statement that month after a settlement was reached between the publication and recent Georgetown Law graduate for an undisclosed sum.

Shortly after, Editor-in-Chief Matt McAllester was forced to take a leave of absence for “personal reasons” in the beginning of August following an age and sex discrimination suit filed against Time Inc. by its former European editor, Catherine Mayer, in which McAllester is featured as the main offender. By August 25, McAllester had been dismissed from his position, the New York Post reported, citing internal company memos.

000000
Popular comments
so, subscriptions must also down for the online edition...soon to be out of business perhaps?
michael
6 September 2017, 00:04 GMT6
000000
It would be nice to see Russia activate many court cases, for defamation of character, where the MSM is concerned. They are seriously dangerous, with all the tittle tattle and lack of evidence they come out with.
anne00marie
6 September 2017, 00:12 GMT6
000000
Newsfeed
0
New firstOld first
loader
LIVE
Заголовок открываемого материала
Access to the chat has been blocked for violating the rules . You will be able to participate again through:∞. If you do not agree with the blocking, please use the feedback form
The discussion is closed. You can participate in the discussion within 24 hours after the publication of the article.
To participate in the discussion
log in or register
loader
Chats
Заголовок открываемого материала
Worldwide
InternationalEnglishEnglishMundoEspañolSpanish
Europe
DeutschlandDeutschGermanFranceFrançaisFrenchΕλλάδαΕλληνικάGreekItaliaItalianoItalianČeská republikaČeštinaCzechPolskaPolskiPolishСрбиjаСрпскиSerbianLatvijaLatviešuLatvianLietuvaLietuviųLithuanianMoldovaMoldoveneascăMoldavianБеларусьБеларускiBelarusian
Transcaucasia
ԱրմենիաՀայերենArmenianАҧсныАҧсышәалаAbkhazХуссар ИрыстонИронауОssetianსაქართველოქართულიGeorgianAzərbaycanАzərbaycancaAzerbaijani
Middle East
Sputnik عربيArabicArabicTürkiyeTürkçeTurkishSputnik ایرانPersianPersianSputnik افغانستانDariDari
Central Asia
ҚазақстанҚазақ тіліKazakhКыргызстанКыргызчаKyrgyzOʻzbekistonЎзбекчаUzbekТоҷикистонТоҷикӣTajik
East & Southeast Asia
Việt NamTiếng ViệtVietnamese日本日本語Japanese中国中文Chinese
South America
BrasilPortuguêsPortuguese
NewsfeedBreaking
01:00 GMTWho has the Edge Between Manchester United and Liverpool?
00:12 GMTBritish Military Brings Over 100 People Who Had Left Afghanistan to UK - Defense Ministry
YesterdayUS Seeking Clarity Over Turkey’s Intention to Declare US Ambassador Persona Non Grata
YesterdayUS Authorities Getting Veterans Involved in Resettlement on Afghan Refugees - Reports
YesterdayBiden’s Popularity Drops More Than That of Any Other US Leader Since End of WWII - Poll
Yesterday‘Rust’ Director ‘Gutted’ by Fatal Shooting of Halyna Hutchins on Set
YesterdayPotty-Mouthed PM: Broadcaster Blocks Boris Johnson's Remarks on Gay Men, Muslim Women
YesterdayHome Run! The Astros Win a Ticket to the World Series Amid Sign-Stealing Scandal
YesterdayColombian Authorities Reportedly Capture Elusive Drug Lord Otoniel, Leader of Clan del Golfo
YesterdayTwitter CEO Jack Dorsey Issues Cryptic Warning of ‘Hyperinflation’ Soon To Happen in the US
YesterdayOne Person Killed, 7 Injured in Shooting Near University Campus in US
YesterdayIran Set to Cooperate With Islamic World in Nuclear Development - Spokeperson
YesterdaySupermarkets in UK Reportedly Use Cardboard Cut-Outs to Disguise Empty Shelves
Yesterday5.0 Magnitude Earthquake Shakes La Palma as Spanish Island Territory Reels From Volcano Eruption
YesterdayJeremy Clarkson Slams 'F***ing Government' at Farming Awards Ceremony - Video
YesterdayPakistan Denies Reports of Preparing to Sign Airspace Agreement With US
YesterdayWatch Massive Migrant Caravan Push North Into Mexico as US Reports Record Apprehensions
YesterdayWatch Iranian Governor Getting Slapped on Stage During His Inauguration
YesterdayAssange's Extradition Incomprehensible After Revelations CIA Plotted to Kill Him, Fiancée Says
YesterdayUnderwater Treasure May Point to Location of Long-Gone 'Island of Gold' Empire