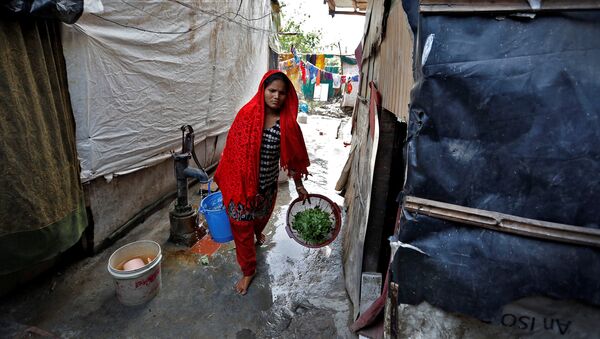 The UN Refugee Agency and Norwegian Refugee Council urge the international community to do the utmost to help the Muslim Rohingya refugees from Myanmar amid UN inability to provide humanitarian aid in the region.

MOSCOW (Sputnik) — The international community, especially countries bordering Myanmar, must do everything in their power to make sure that rights of Muslim Rohingya refugees, who are fleeing violence in Rakhine State, are respected, UNHCR [United Nations High Commissioner for Refugees] and Norwegian Refugee Council (NRC) representatives told Sputnik.

According to UNHCR, estimated 123,000 minority Rohingyas have crossed into neighboring Bangladesh since violence erupted in August in the northern part of Myanmar's Rakhine state, a place of growing segregation of Muslim communities by the Buddhist majority.

"As refugees continue to flee the violence over international borders, it is clear that the situation in Rakhine State is also a regional issue, and Myanmar’s neighbors must ensure that they uphold the rights and meet the needs of all refugees," NRC’s Country Director in Myanmar, Prasant Naik, said.

A UNICEF representative earlier confirmed to Sputnik that the United Nations has not been able to continue its humanitarian aid deliveries due to the security situation since August 25, when Rohingya insurgents attacked dozens of police posts, adding that "the UN is proactively exploring every possible means for restarting humanitarian operations as soon as possible."

Why are #Rohingya refugees having to buy their plastic sheeting? Why is there a flourishing market for these? Where are the agencies? pic.twitter.com/AroNVz8KV1

The UNHCR warned that an unknown number of refugees remain stranded at the border and those who did make it to predominately Muslim Bangladesh are in poor condition. In response to the Rohingya crisis, the Indonesian Muslim Intellectuals Association (ICMI) has called on the Indonesian government to initiate a conflict resolution process for Myanmar in the Association of Southeast Asian Nations (ASEAN).

"We hope that regional groups like ASEAN can help with efforts to address the root causes of this crisis. We will also be looking to the international community for support to provide life-saving assistance to the new arrivals in Bangladesh," UNHCR spokeswoman Vivian Tan told Sputnik.

The NRC, a long with another 15 international non-governmental organizations (INGOs), signed an open letter on August 31 condemning violence across northern Rakhine. The letter also called on Myanmar's government to restore access to conflict areas and ensure the delivery of humanitarian aid.

The letter was made public after it became known that Myanmar officials blocked several INGOs and all UN agencies from delivering food and other supplies to the country’s Muslim Rohingya minority.