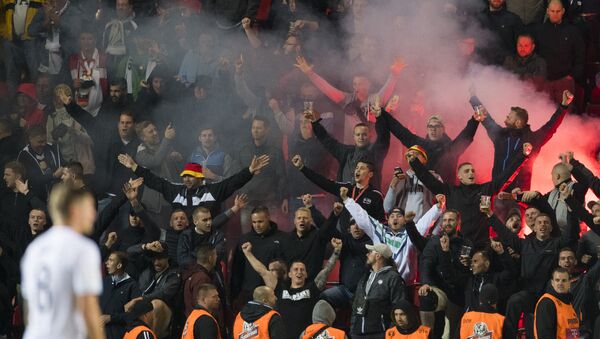 MOSCOW (Sputnik) — German police are investigating cases of manifestations of Nazism by German football fans at a qualifying match for the World Cup-2018 against the Czech Republic's team, President of the German Football Association (DFB) Reinhard Grindel said Tuesday.

On Friday, Germany secured a 2-1 victory over the Czech Republic in the Group C match in Prague. Hundreds of right-wing German fans, disapproving of the policy of the DFB, broke a minute's silence for two Czech officials, which opened the game, shouting offensive chants and Nazi slogans.

"Several criminal proceedings are underway. Competent police authorities are investigating the material," Grindel said, as quoted by the Sportschau magazine.

​The incident coincided with the anniversary of Nazi Germany's invasion of Poland in 1939, after the so-called Gleiwitz incident, that marked the beginning of the World War II.

Right-wing extremism has been on the rise in Germany ever since the eruption of the refugee crisis in 2015, when one million migrants and refugees fleeing war and poverty arrived in the country. In 2016, German police filed the highest number of right-wing attacks on politicians on record.