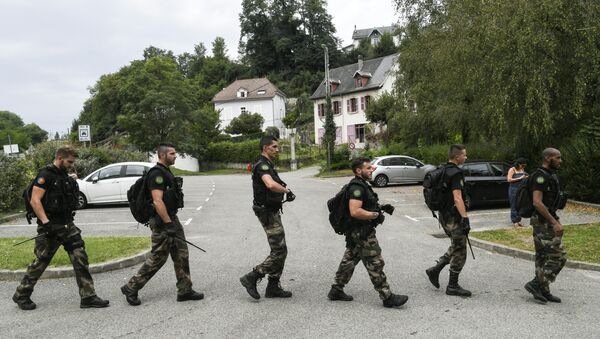 © AFP 2021 / Philippe Desmazes
Subscribe
A 34-year-old man has been charged with kidnap by police investigating the disappearance of a nine-year-old who went missing at a wedding in eastern France. Maelys de Araujo has not been seen since August 27 but her DNA was found in the suspect's car.

Maelys was last seen at a wedding reception in a community center in the village of Pont-de-Beauvoisin, near Grenoble.

Detectives spoke to 200 wedding guests and began to focus their enquiries on suspect Nordahl Lelandais, after they noticed scratches on his arm and knee. ​​Police, led by an examining magistrate, reportedly became suspicious when they heard he had washed the car shortly after the wedding and had put it up for sale.

The police carried out a forensic search of Lelandais's car which revealed the missing girl's DNA on the dashboard. Lelandais's lawyer, Bernard Meraud, said his client had accepted the girl got into his car but denied he had taken her or killed her.

"He declared that the little girl got into the vehicle with a little boy, on the back seat, to see if his dog was in the trunk," said Mr. Meraud.

Police sniffer dogs followed the girl's scent but reportedly lost it in the car park, suggesting Maelys was taken away from the venue in a car.

Volunteers join the search for nine-year-old girl #MaelysdeAraujo who vanished during a family wedding in the French Alps pic.twitter.com/knuQXrEfKC

'Needle in a Haystack'

​Now police and volunteers are conducting a painstaking search of fields and ditches in the vicinity of of Pont-de-Beauvoisin.

"It is like looking for a needle in a haystack, extremely tedious work but very important," said police chief Yves Marzin.

Mr. Lelandais has been charged with kidnapping, illegal confinement or arbitrary detention of a minor of less than 15 years old. His mother has insisted her son, who worked as a handyman, was innocent.

"I've not raised a monster, he's never been a monster," she told RTL radio.

Under the French criminal justice system serious investigations, like murder or kidnapping, are led by an examining magistrate or judge, who interrogates suspects and orders searches. His or her role is not to prosecute the accused but to gather the facts.

The inquisitorial system, which dates back to the 1804 Napoleonic code, is very different to the adversarial system used in Britain, the United States and many other countries.