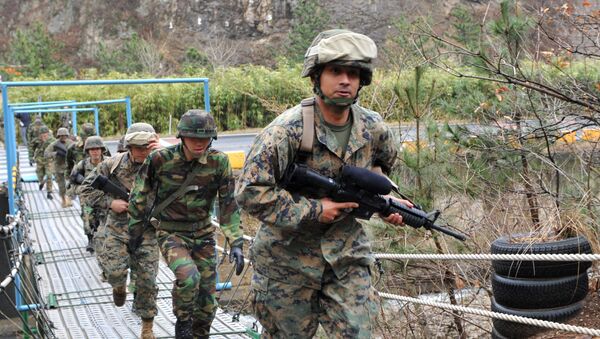 The White House reported that Donald Trump and Moon Jae-in agreed to strengthen joint military capabilities in light of the growing nuclear crisis on Korean peninsula.

WASHINGTON (Sputnik) — US President Donald Trump and South Korean President Moon Jae-in agreed in phone talks on Monday to strengthen joint military capabilities in light of the growing nuclear crisis on Korean peninsula, the White House said in a statement.

According to the statement obtained by Sputnik, Trump also "conceptually approved" the purchase of billions of dollars worth of US military equipment by South Korea to counter the alleged North Korean threat.

The South Korean Environment Ministry said, also on Monday, that it had conditionally approved THAAD deployment, thus giving the go-ahead to the systems' transition to full operation.

US Provoking Conflict With North Korea to Justify THAAD Deployment - Assange
In May, White House national security adviser Lt. Gen. H.R. McMaster told his South Korean counterpart that the United States would continue paying for THAAD, although Trump earlier indicated that he had suggested to Seoul that it should pay for the system which costs about $1 billion.

The United States and South Korea have recently demonstrated their military capabilities in joint drills held in the South Korea’s northeastern province of Gangwon.

According to Monday's statement, the US president also reiterated his "in-principle approval" for South Korea's plan to lift restrictions on their missile payload capabilities.

Under the current bilateral treaty, Seoul's ballistic missiles are confined to range of 500 miles and weight of 1,100 pounds.

The tensions on the Korean Peninsula have been high over recent months over Pyongyang's repeated nuclear and missile tests. On Sunday, North Korea said that it had successfully tested a hydrogen bomb that could be loaded on an intercontinental ballistic missile.

Pyongyang's presumed sixth nuclear test since 2006 was held Sunday, just days after North Korea launched a ballistic missile over the territory of Japan. North Korea has been carrying out its missile and nuclear tests in violation of the UNSC resolutions.