US Searches for Explosives in Russian Trade Mission in US? 'It's Ridiculous!' 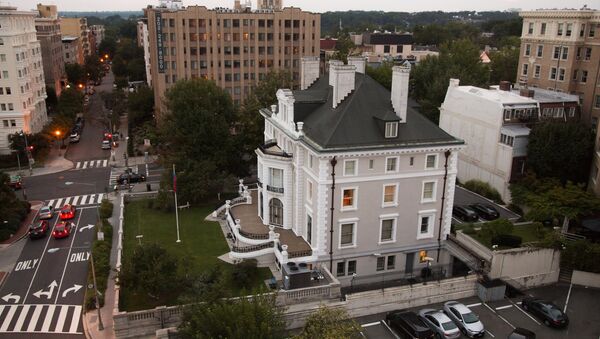 Washington's demands calling on Russia to close its diplomatic entities in several US cities as well as recent US searches for explosives in Russia's diplomatic compounds have caused vivid reaction among Russian experts and politicians.

Russia Contemplates Retaliation After US Starts 'Round Two' of 'Diplomatic War'
A political expert and professor at the Diplomatic Academy of the Russian Foreign Ministry, Alexander Vavilov, called the actions of the US authorities "impudent" in an interview with Radio Sputnik.

At the same time, he expressed an opinion that the US is able to "do foolish things" only to a certain extent.

"We must proceed from the fact that no one can ignore Russia's weight, and, of course, the Americans will take this into account. That's why they can be rude and do stupid things — but only to a certain extent, because there are boundaries that are unlikely to be completely ignored," Vavilov said.

Russian Foreign Ministry spokeswoman Maria Zakharova said Sunday that September 2, the day when the Russian Trade Representation building in Washington, DC, was searched by US law enforcement agencies, was "a black day in the history of US democracy."

The diplomat also expressed her indignation, saying that US law enforcement agencies were looking for explosive devices in the compounds, which, in her opinion, was an unjustified move driven by several years of anti-Russian rhetoric, peddled in the United States.

According to Vavilov, the fact that the US authorities searched for explosives in the Russian diplomatic compounds is one of the funniest things he ever heard.

"Now they talk about explosives, next time they will look for an atomic bomb, and then they'll think of something else. Could any rational person really think that there are explosives in a trade mission, which is created exactly for the development of relations and mutual contacts. It's ridiculous," Vavilov said.

The expert is confident that the Russian side will respond to the US move, although Moscow won't be in a hurry to do so.

"We won't jump off the deep end — why should we? The whole world can see that the actions of the US side are just hysteria, but we reserve our right [to respond], and this right is justified by all international laws and provisions," the expert concluded.

The US State Department said on Thursday that Washington demanded that Moscow close down its consulate general in San Francisco and two other diplomatic entities in New York City and Washington, DC by Saturday.

Head of Russian Trade Mission in US Slams Search as 'Illegal Seizure'
A few days later, the US conducted searches in the buildings of the Russian General Consulate in San Francisco and its trade mission in Washington. Russian Deputy Foreign Minister Sergey Ryabkov commented on the move saying that the searches conducted by the United States at the Russian diplomatic properties on US soil are outrageous and constitute aggressive violations of international law.

Ryabkov also noted that the recent developments required further reflection and Russia would not rush into retaliatory measures, adding that it was difficult to respond to actions taken by "hooligans."