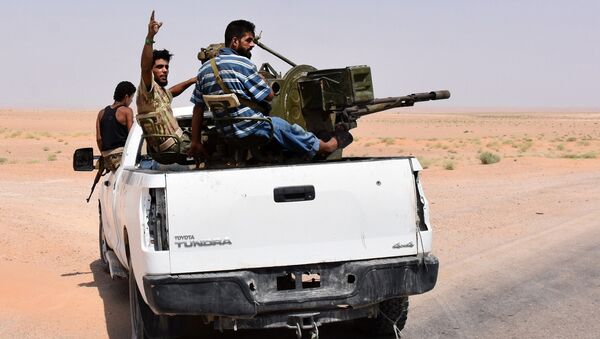 © AFP 2021 / George OURFALIAN
Subscribe
The Russian Defense Ministry said that the Syrian army is advancing toward the besieged city of Deir ez-Zor with the assistance of the Russian aviation.

The Syrian government forces have driven Daesh terrorists out of strategic positions on the Palmyra-Deir ez-Zor highway, the Russian Defense Ministry said.

"Syrian army's units conducting the offensive from the direction of as-Sukhnah [city in the Raqqa province], have driven Daesh terrorists out from positions they had controlled on the highway from Palmyra to Deir-ez-Zor."

The ministry added that the Syrian Armed Force's group conducting the operation to free Deir ez-Zor has advanced 8 kilometers over the past 24 hours and captured 2 strategic heights in the region.

"Two tanks, three infantry fighting vehicles, over 10 off-road vehicles equipped with heavy arms have been destroyed as a result of the [Russian] airstrikes. Terrorists lost a total of 70 fighters who were killed or injured," the Russian ministry said.

The Russian Defense Ministry said that the victory over Daesh terrorists in Deir ez-Zor and the lifting of the city's siege "will become the strategic loss of the international terrorist group in the Syrian Arab Republic."

'Victory in Sight' as Syrian Army, Russian Planes 'Chasing' Daesh to Deir ez-Zor
The Syrian army supported by the Russian Aerospace Forces has been advancing toward Deir ez-Zor from three directions as part of the campaign to free the city launched in August.

Earlier in the day, an informed source told Sputnik that the Syrian government troops are fighting against Daesh terrorists some 20 kilometers from the city of Deir-ez-Zor.

"The soldiers of Gen. Suheil are located 18-20 kilometers away from the city of Deir ez-Zor," the source said.

UN Expects Syria's Deir ez-Zor, Raqqa to Be Liberated From Daesh in October
The army's troops are approaching Deir ez-Zor's airbase and are ready to lift Daesh's blockade of the city. According to eyewitnesses cited by the source, people in the besieged city feel optimistic and celebrate the military's rapid success.

Large numbers of terrorists were killed in airstrikes conducted by Russian and Syrian air forces over the past 24 hours, which has enabled the Syrian army to accelerate the offensive, the source added.