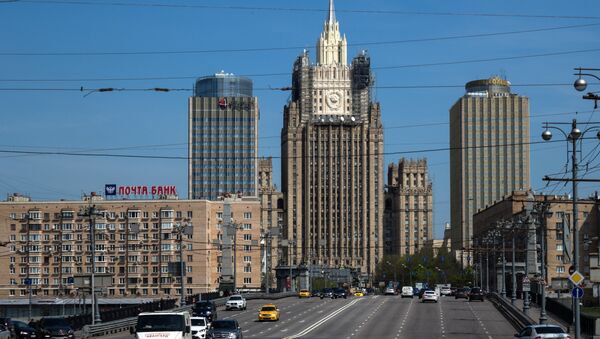 The Russian Deputy Foreign Minister commented on North Korea's recent nuclear test, saying that Moscow doesn't consider the DPRK to be a significant threat yet, but US and South Korean plans on THAAD expansion near Russia's borders may elicit a military response.

On Sunday, North Korea said that it had successfully tested a hydrogen bomb that could be loaded on an intercontinental ballistic missile. According to the Japanese Defense Ministry, the bomb had a yield of up to 70 kilotons.

"We see a dangerous trend in the progress of North Korea… We see that the country aims to become a country possessing nuclear weapons. Of course, it is an alarming signal for us, such developments are unacceptable for us. This issue requires careful monitoring… I repeat that we do not register a threat from the side of North Korea for ourselves as several North Korea's neighbors, especially from the ranks of the US allies, feel," Ryabkov said.

He also stated that Pyongyang should cease the provocative actions that are destabilizing the situation.

"Pyongyang should stop provocative actions that destabilize the situation. But having said this, I cannot but note that the only way to resolve this protracted crisis is the political-diplomatic [approach]… It is clear that in this situation any hasty steps can lead to an explosion," Ryabkov told reporters.

Ryabkov added that North Korea can be influenced by setting forth realistic proposals for dialogue.

"All participants in the discussion of the problem have an impact on the DPRK. I think it is possible to influence North Korea, putting forward realistic proposals for dialogue. And here very much depends on our US colleagues who, unfortunately, are still more inclined to speak in the language of sanctions, sometimes in the language of threats, rather than to seek a solution through diplomatic tools," Ryabkov told reporters.

Earlier in the day, the BRICS leaders adopted a joint declaration that mentioned among other issues that the ongoing tensions around North Korea could be settled only "through peaceful means and direct dialogue between all the parties concerned."

"The final document of the Xiamen summit includes provisions with a serious and harsh condemnation of the conducted [nuclear] test. But at the same time, the very same part of the declaration stresses that the only way forward is that of a direct dialogue between all the parties concerned," Ryabkov told reporters.

Strengthening sanctions against North Korea may lead to the deterioration of the situation in the country up to the destruction of its economic system, he added.

"All new [sanctions] will be aimed at suffocation, destruction of the economic system. It is clear that under such circumstances it becomes more and more dramatically difficult to make decisions on the issue," Ryabkov said.

The deputy foreign minister pointed out that it was becoming more and more urgent for Russia to propose a UN Security Council resolution envisaging not only restriction measures, but also ban on unilateral sanctions.

"Secondly, we will insist on the necessity to look for a political solution. We are adopting sanctions, we are boosting them, North Korea is responding. Yes, that is a violation of the UN Security Council’s demands, these are provocative actions, they are unacceptable for us, we strongly condemn them but an exchange of strikes and hostile rhetoric are not leading to a settlement. Only a political and diplomatic means can lead to the solution," Ryabkov added. THAAD in Alaska
© Missile Defense Agency
The expansion of the THAAD missile defense system near Russia's borders may elicit a military response by Moscow to such moves, the Russian Deputy Foreign Minister stated.

"If all this would happen at suchan alarming pace, it is inevitable that at some point, perhaps, the question would arise about our reaction in the military sense, in the setting of some kind of counterbalance. I do not want to anticipate anything. But one cannot perceive things isolated from the context," Ryabkov told journalists, commenting on the deployment of the THAAD in South Korea.

"We did not and do not hide the negative attitude toward these plans. They [missile defense systems] did not appear now, and now, as I understand it, they are being accelerated," the deputy foreign minister said.