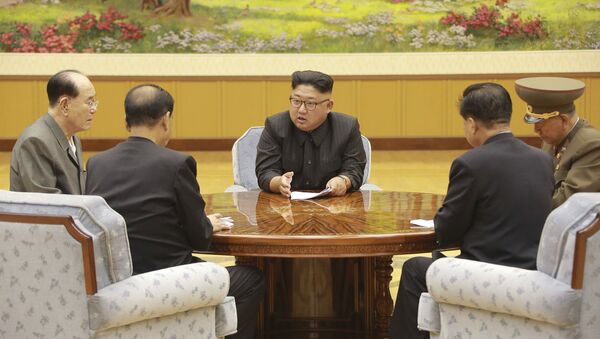 On Sunday North Korea announced that it had successfully tested a hydrogen bomb that could be loaded onto an intercontinental ballistic missile. Joshua Pollack editor of the Nonproliferation Review said that the sanctions against the DPRK aren’t working, so a new approach should be taken by the US and western countries to de-escalate the situation.

The test was North Korea's sixth and by far the most powerful weapon it has detonated to date. The shockwaves from the test were first registered in China, then in South Korea and Japan, before spreading further out across the Pacific.

“This is of serious concern to the international community but it’s not a surprise. They have been indicating to us by one means or another that this was coming. Also the timing itself was not obvious, but a lot of us have been watching and waiting relying just on pressure and sanctions alone to try to get the North Koreans to desist,” Joshua Pollack, from the Nonproliferation Review said.

When talking about what message North Korea is trying to send the world with this test, the editor noted that the regime was trying to say it’s “capable of conducting such tests and it must be taken seriously.”

“I don’t think that another round of sanctions will make a serious difference. The North Koreans have made it clear that they respond to pressure with pressure. If the United States, its allies and the international community more broadly are going to engage in ‘maximum pressure’ which is the current US phrase, than the North Korea will respond with maximum pace of development of their missiles and nuclear weapons,” Pollack said.

DPRK H-Bomb: Chinese President Says ‘Dark Shadow Looms’ Over the World
He further said that the time to get DPRK to desist may have passed and now it’s more important to establish a “crisis management mechanism”.

“The US is now targeting businesses in third countries that do business with North Korea, such as China, Russia and others. That seems to be the direction that the US is heading in,” the editor said.

Pollack spoke about who the potential mediator for the Korean crisis could be. In his opinion there is only one possible mediator, China.

“When we went through a similar series of events over a decade ago it was China that stepped forward to convene talks between the North Korea and the US in Beijing,” the editor said.

He added that later on this was broadened to include South Korea, Japan and Russia, the so-called six party talks.

According to him, the “Chinese are the only ones with the relationships on two sides who could convene this, although relations with North Korea are not very good right now,” the editor said.

North Korea Allegedly Preparing for Another ICBM Launch
Following a Sunday morning detonation of what many believe to be a powerful hydrogen bomb by the People's Democratic Republic of Korea, heads of state have taken steps to assure residents and allies that the move is strongly condemned and that action is being taken. US Secretary of State Rex Tillerson quickly moved to contact regional allies while US Secretary of the Treasury Steven Mnuchin assembled his team to detail potential additional punitive financial sanctions that could be applied to the isolated northern nation-state.

The head of the United Nations test ban treaty organization, Lassina Zerbo, recently pointed out that the sanctions already imposed against Pyongyang are having no discernible effect, according to The Guardian.

Chinese President Xi Jinping and Russian President Vladimir Putin arranged a meeting on the sidelines of the ongoing annual BRICS economic summit, making assurances that both nations would continue to "adhere to the goal of the de-nuclearization of the Korean Peninsula, have close communication and coordination and properly respond," cited by China's official Xinhua News Agency.