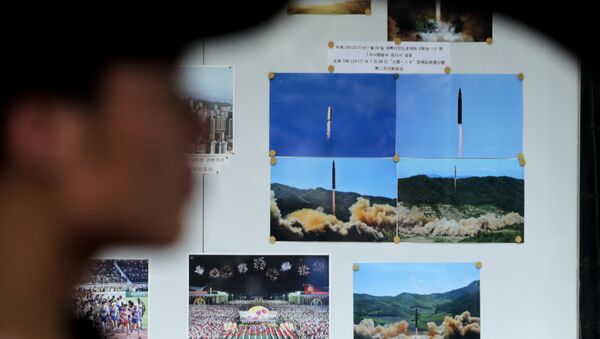 According to several experts, the recent North Korea's nuclear tests undermined Beijing' authority and posed a physical threat to China rather than to the US.

MOSCOW (Sputnik), Tommy Yang — Despite its frequent harsh rhetoric against the United States, Pyongyang's recurrent missile and nuclear tests mainly undermine China as their timing coincides with key global events hosted in China and undermines Beijing' authority, as well as posing the most immediate physical threat to China above all, experts told Sputnik.

Russia Sees No Significant Threat From North Korea Yet
North Korea has accelerated the development of its nuclear arms program this year, conducting a series of missile tests and promising to launch a missile strike against the US territory of Guam. Amid increasing concerns over Pyongyang's nuclear program, members of the UN Security Council, including the United States, China and Russia, unanimously approved on August 5 new sanctions against North Korea that could cut the nation’s annual export revenue by $1 billion.

Just hours before Chinese President Xi Jinping delivered his keynote speech on Sunday to open the BRICS Summit held in the southern port city of Xiamen, local residents in Northeast China experienced tremors, which the Chinese Seismological Center detected as a 6.3-magnitude earthquake. North Korean scientists successfully tested a hydrogen bomb for the intercontinental ballistic missile (ICBM) in the northern nuclear test ground of the country on Sunday, the official Korean Central News Agency (KCNA) reported shortly afterward, adding that it also successfully miniaturized the hydrogen bomb to be loaded into an ICBM.

North Korea showed no sign of slowing down its nuclear arms program amid stern condemnation and expanding economic sanctions from the international community. Members of the United Nations Security Council (UNSC), including the United States, China and Russia, unanimously approved new sanctions against North Korea on August 5, which could cut the nation’s annual export revenue by $1 billion.

North Korea H-Bomb Threat: Who Could Be a 'Possible Mediator' in This Crisis?
Increasingly, Pyongyang displayed less and less consideration towards Beijing with each prominent step in the progress of its nuclear arsenal, despite relying heavily on trade with China to finance its nuclear programs. Before spoiling the grand opening of the BRICS Summit on Sunday, North Korea successfully tested one of its most advanced missiles, the Hwasong-12, on May 14, when 29 head of states gathered in Beijing for a summit to celebrate the One Belt One Road Initiative championed by the Chinese President.

"The timing of North Korea’s nuclear test is not coincidental. It appears Pyongyang chose to conduct these tests when China hosts important events. It’s something Chinese authorities must think over carefully," Zhang Liangui, an expert on North Korea at the Central Party School, which trains Chinese officials in Beijing, told Sputnik.

The Chinese expert argued that, compared to the United States or Russia, China is the country that has the most to lose if North Korea becomes a nation with nuclear capabilities.

"Russia’s key regions are all in Europe, while China’s key regions are right next to the Korean peninsula. In case of a nuclear accident in North Korea, the damage to China would be critical. China needs to take this important issue involving its national security very seriously. Some people think China is helping the United States in supporting the denuclearization of North Korea. This is a false argument because the United States is so far away from North Korea. China is the country faces the most damage, if denuclearization of North Korea fails," Zhang said.

Pyongyang eager to prove its capabilities

Based on the strength of the earthquake caused by North Korea’s hydrogen bomb, Chinese nuclear experts estimate that its destructive force is several times of the nuclear bomb dropped on Nagasaki by the United States during the WWII.

"Despite different reports on the strength of the earthquake caused by the explosion, a conservative estimate of the yield of the bomb stands at around 100-kilotonne, which is already several times of the 20- kilotonne bomb dropped on Nagasaki," Zhao Tong, a fellow in Carnegie’s Nuclear Policy Program at the Carnegie–Tsinghua Center for Global Policy in Beijing, told Sputnik.

It is very likely for North Korea to launch a ballistic missile with nuclear warheads to further demonstrate its nuclear capabilities, Zhao suggested.

"Historically, many countries, including China, have conducted ballistic missile tests with nuclear warheads. But it’s not something must be done. Not all nuclear nations did this kind of test. There is a trend for North Korea that the more doubt it faces in terms of its nuclear technologies in the international community, Pyongyang is more eager to prove its capabilities. This is the risk we face," he said.

Zhang, the Beijing-based scholar, suggested that Chinese policy makers need to make a decision on what is more important to them: the denuclearization of North Korea or the stability of the regime in Pyongyang.

"We need to make clear is what our priority is. Do we prioritize the denuclearization of North Korea, or do we view the stability of the current regime in Pyongyang as our priority? Without answering this question first, there will be no effective solution. The current government in North Korea has reiterated over ten times that it would never give up its nuclear arms program. Unfortunately, many countries in the world failed to get his message," Zhang said.

The expert added that it would be a tragedy for mankind if the current "appeasement" policies continue to take the lead.

"A number of new nuclear nations could emerge and the earth would face complete destruction soon. It’s impossible for North Korea to focus on economic development after it obtains nuclear capabilities. The situation in East Asia will become unpredictable," he said.

Avoid war at all cost

Zhao, the Chinese nuclear expert, argued that to avoid a regional war on the Korean peninsula, China may have to accept North Korea as a nuclear nation.

"A nuclear North Korea is indeed a security threat for China. But this security threat is not as serious as a regional war on the Korean Peninsula, which has a chance to escalate into a nuclear war. China will be forced to be involved in a war like this, because of its strategic interests. As a result, China has to avoid the worst scenario [a regional war], while having to accept a less bad situation [nuclearized North Korea]," Zhao said.

The Beijing-expert pointed out that many Chinese officials and scholars continue to have a deep distrust and hostile attitudes against the United States.

The expert added that, under the influence of this way of thinking, this group of Chinese would prefer not to threaten the current regime in North Korea, even if it has obtained nuclear capabilities.