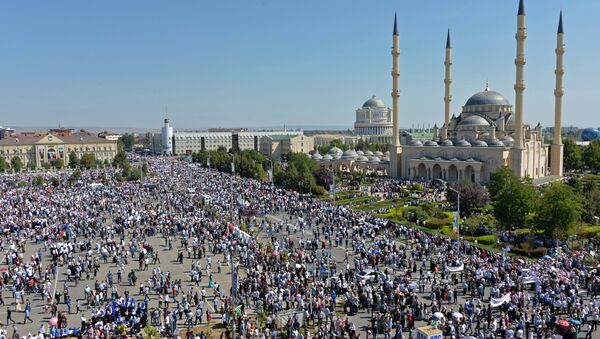 MOSCOW (Sputnik) – Thousands of Chechens gathered on Monday in the center of Grozny, the capital of Russia’s Chechen Republic, to protest against the anti-Muslim violence in Myanmar.

On Sunday, hundreds of people rallied in front of Myanmar’s embassy in Moscow protesting against the sectarian violence in Myanmar.

According to the RBC broadcaster, the rally in Chechnya kicked off at 08:00 GMT near the Heart of Chechnya mosque, which is the biggest mosque in the republic.

Russia’s Chechen Republic leader Ramzan Kadyrov compared the practices of soldiers and monks in Myanmar as for the Muslims of the Rohingya ethnic group with the practices of the Nazis in the concentration camps.

Earlier in the day, thousands of people gathered in the capital of Chechen Republic protesting against the anti-Muslim violence in Myanmar. According to local police, more than one million people gathered at the rally.

"The policies of military and of monks exceed the activities of the Nazis in death camps. The authorities of the country have stripped over 1 million Rohingya of their right to life… The United Nations, the European Union, regional organizations of Southeast Asia, kings, presidents, media outlets keep watch over it without saying anything," Kadyrov said at the rally.

The official added that the whole ethnic group was close to extinction and the tragedy had been lasting for years, however, no one introduced the sanctions against Myanmar.

"I will tell you honestly, I have read about various statements… We know that Muslims perceive these events in Myanmar very emotionally, but I unfortunately did not have time to get acquainted with them personally. I would like to first get abreast, and then somehow give an assessment. I will not do it right now," Peskov said, answering the question about how the Kremlin reacted to Kadyrov's words.

In late August, Muslim insurgents of Rohingya origin attacked security posts in the state of Rakhine. The attacks prompted a harsh response from Myanmar’s authorities, with the ongoing clashes between Myanmar government forces and Muslim insurgents killing hundreds of people and forcing thousands to flee their homes.