Zakharova on Searches in Russian Trade Mission: 'Black Day for US Democracy' 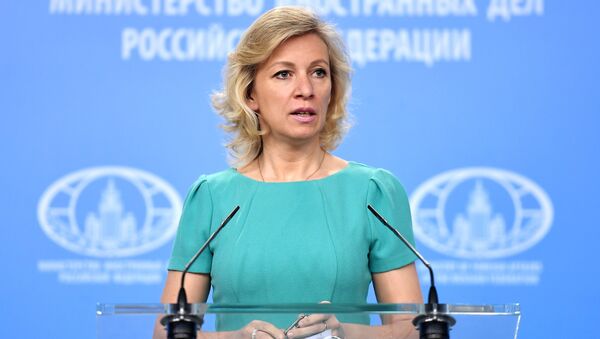 © Sputnik / Evgenya Novozhenina
/
Go to the mediabank
Subscribe
International
India
Africa
Russian Foreign Ministry spokeswoman Maria Zakharova lashed out at the government of the United States for the closure and searches in the Russian Trade Representation, saying that those steps were driven by several years of anti-Russian rhetoric.

BLAGOVESHCHENSK (Sputnik) — Russian Foreign Ministry spokeswoman Maria Zakharova said Sunday that September 2, the day when the Russian Trade Representation building in Washington, DC, was searched by US law enforcement agencies, was "a black day in the history of US democracy."

"This is, beyond any doubt, a black day in the history of US democracy and US special services. You know, this is for sure a most tremendous failure to set up your special services like that," Zakharova said at a talk show on Rossiya 1 TV channel.

In her further comments, Zakharova described the searches in Russian diplomatic facilities as a "terrible folly," while at the same time arguing that they had been thoroughly calculated in advance. The diplomat also expressed her indignation, saying that US law enforcement agencies were looking for an explosive device in the compounds, which, in her opinion, was an unjustified move driven by several years of anti-Russian rhetoric, peddled in the United States.

The spokeswoman also insisted that the searches were induced by a political put-up job.

Zakharova added that the actions of US authorities toward Russian diplomatic property breached international law and ran counter to the principle of diplomatic immunity. The official also said that Washington was intended to put up the compounds owned by Russia for sale.

"I am about to say a sensational thing. This is unbelievable. Officially, through the [US] State Department channels. we have not been hinted, but we have been directly notified that they expect to sell these facilities to the American state," the spokeswoman said.

Answering a question on possible retaliatory steps that Moscow can take, Zakharova said that she was not competent to take this decision and noted that it did not have to be taken immediately. The spokeswoman also stressed that Russia-US relations were deadlocked on the side of Washington, and the White House froze the bilateral contacts that had been developed for many years.

Moscow Calls Seizure of Diplomatic Mission in US 'Gross Violation of Int'l Law'
On Thursday, the US State Department said in a press release that Washington had demanded that Moscow close down its Consulate General in San Francisco and two other diplomatic entities in New York City and Washington, DC by Saturday. After Russian diplomats left the building of trade representation, US security agents entered the premises and conducted a search there.

Washington said the decision on the closure was made as a response to Russia's move to reduce the US diplomatic staff in Russia to 455 people, the same number of diplomatic personnel Russia has in the United States.

In December 2016, then US President Barack Obama decided to expel 35 Russian diplomats and block access to two Russia's diplomatic compounds as a response to Moscow's reported meddling in presidential election in the United States.