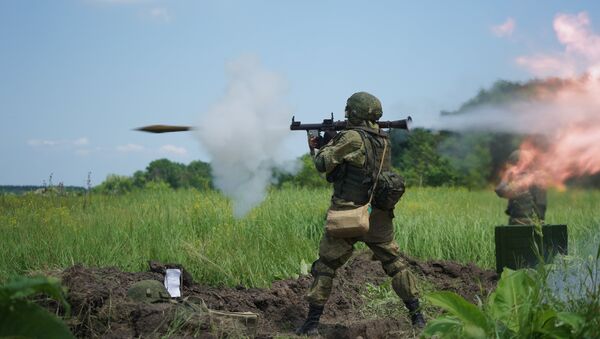 Over the past couple weeks, the Syrian Army and Russian air power have been busy liquidating a large group of Daesh militants near Akerbat, a strategic village on the border between the provinces of Hama and Homs. The further Syrian forces encircled the terrorists, the stronger resistance became, with Daesh throwing not just infantry, but also its 'jihad-mobile' machine gun trunks, crudely built armored cars, and even tanks against Syrian ground forces.

Commenting on these battles, Andrei Kotz, a military observer for Russia's RIA Novosti News Agency, wrote that these and other recent battlefield experiences have conclusively demonstrated that in close-quarters fighting with armored vehicles, a decisive role is often played not by high-precision bombs and rockets, "but good old-fashioned hand-held anti-tank grenade launchers."

Syrian Army Liberates Last Major Terrorists' Resistance Area in Central Syria
"And even though many experts consider RPGs a weapon of the last century," the reality, according to Kotz, is that these weapons "will continue to remain relevant for decades to come, until belligerents in wars learn to fight outside one another's line of sight."

With this in mind, the analyst suggested that it was worth taking a look at some of the best man-portable anti-armor rocket and missile systems in the world, judged on the merits of reliability, accuracy, longevity, armor-piercing power, and size.

According to Kotz, the Soviet-made RPG-7, adopted into the Soviet Army in 1961, is without a doubt the most recognizable RPG launcher in the world, and the most reliable.

"Over the past [fifty plus] years, over nine million units of this weapon were produced, and its various copycats and modifications are in use by about a hundred different countries. Simple as an axe, reliable, and cheap – these are the main advantages of the RPG-7 which helped to secure its popularity. The grenade launcher has no superfluous components: just a barrel with an optical or mechanical sight and a firing mechanism." 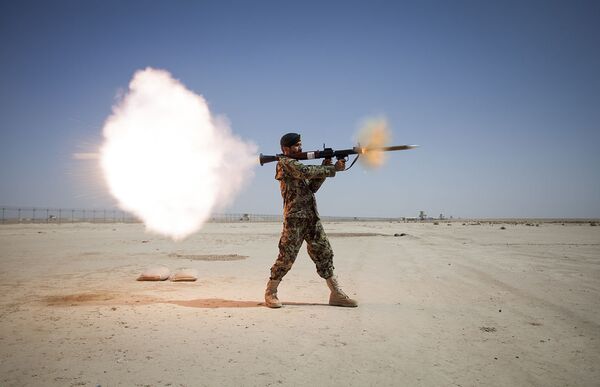 The weapon's extensive availability means that a wide range of ammunition has been developed, with caliber ranging from 40 to 105 mm. These variations mean, in turn, that the RPG-7 is effective as both an anti-tank and anti-personnel weapon, at distances up to 330 meters.

In Kotz' words, "the colossal resource for modernization embedded in the RPG-7 by its creators makes it possible to gradually increase its effectiveness simply by replacing old grenades with new ones, without changing the design of the weapon itself. Today, the Russian Army is equipped with the upgraded RPG7V2, fitted with the UP-7V universal aiming device."

After making their debut in Vietnam in 1968, the observer noted that it can be said without exaggeration that the RPG-7 has been used in pretty much every military conflict since, leaving a deadly mark even against advanced militaries. "Suffice it to say that more than half of the US's losses in Iraq have been to RPG-7s – the armor of the US Army's Hummers proving unable to withstand even the systems' obsolete ammunition," Kotz wrote.

Giving credit where credit is due, Kotz wrote that the US single-shot FGM-172 Short-Range Assault Weapon (SRAW) missile system takes the prize for being the most accurate portable anti-armor system in the list. "The system was adopted by the US Marine Corps in 2002 as a simpler and cheaper alternative to the FGM-148 Javelin anti-tank missile system. Its main advantage is the possibility to work according to principle of 'fire-and-forget'."

As far as targeting is concerned, "it's enough for the gunner to track the target for two-three seconds and launch, after which the weapon's automatic controls kick in." The missile is able to independently account for wind speed and other factors, "and capable of hitting tanks in their upper hemisphere (usually a tank's least protected area)."

The SRAW comes in two variants. The first is an anti-tank round with a cumulative 'Predator' warhead, able to punch through up to 600 mm of armor at distances between 16 and 500 meters. The second is a multi-purpose high-explosive fragmentation warhead, designed to destroy fortified positions as well as lightly armored and unarmored vehicles. "SRAW's baptism by fire took place in Iraq, where it proved to be an effective means for fighting light armored vehicles."

The Carl Gustaf 84 mm anti-tank grenade launcher takes the honors of being the anti-tank system with the best longevity. Accepted into service way back in 1948, the Swedish design continues to serve in the militaries of over 30 countries, including the United States.

"Effectively, this is a classic grenade launcher design featuring two pistol grips, a rifled barrel, a shoulder stop and sighting device," Kotz wrote. "The standard is for the weapon to be manned by two people, one to shoot and the other to reload." 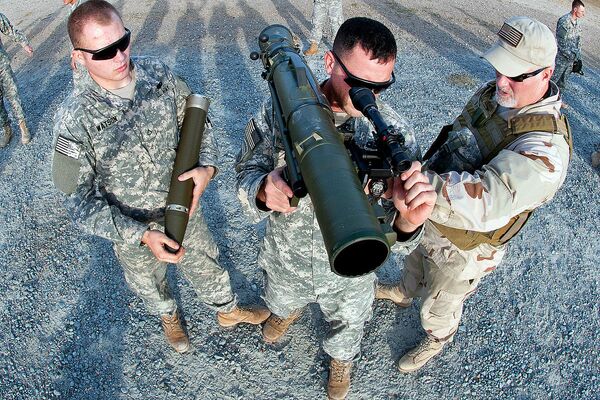 Among the Carl Gustaf's advantages is the wide range of ammunition it can use, including cumulative fragmentation rounds, smoke and flare rounds. Ease of operation is another plus.

Disadvantages of earlier versions included the weight (the first two versions weight 14 and 16.5 kg, respectively). However, Kotz explained that "the fourth, improved variant of the weapon, introduced in 2014, weighs less than 7 kg, thanks to the use of titanium and carbon fiber in its design."

One other drawback is the comparably low 500 mm penetration of the weapon's cumulative round. Nevertheless, the observe noted that "the grenade launcher continues to be widely used by all the warring parties in Afghanistan and Iraq. Several Carl Gustaf grenade launchers have been captured from Daesh militants in Syria by government troops."

The honor of portable anti-armor weapon with the best armor penetration goes to Russia's RPG-30 Kryuk ('Hook'), an improvement on the Soviet RPG-29 Vampir ('Vampire') design introduced in the late 1980s. Adopted into service with the Russian military in 2012, the RPG-30 has two barrels. The larger one features its main cumulative reactive anti-tank grenade, while the smaller one features a precursor or 'imitator' round. The precursor is fired toward the target first, followed, after a short interval, by the main round.

Kotz explains: "When it approaches the tank, the precursor provokes the activation of its active defense system, which fires against the anti-tank grenade or missile. The blast destroys the imitator, but the resulting explosion disguses the main round, already on its way to the target. The tank's ability to detect another anti-tank grenade is possible only after it leaves the cloud of debris," but the RPG-30 leaving no time for reaction. 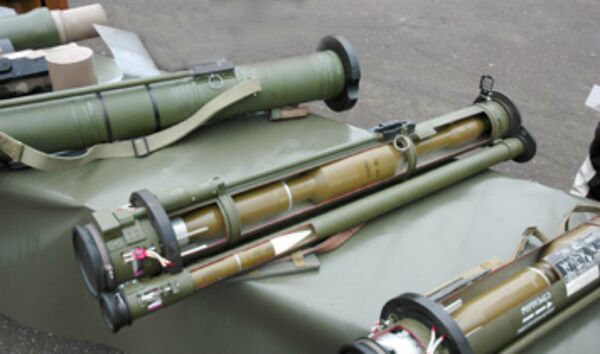 "After the RPG-30's main round reaches its target, it first triggers the forward charge, destroying the elements of dynamic protection. The breakthrough is followed by the cumulative combat unit, which burns into the armor of the tank or APC."

This design enables the RPG-30 to penetrate 700 mm deep into an active-protection-equipped tank, making it the recordholder among modern anti-tank grenade launchers. At a distance of 200 meters, no tank is thought capable of surviving the damage it causes. Evidence of this has been provided by the recent conflicts in the Middile East, where RPG-29 ammo, similar in many respects to the RPG-30, successfully damaged or destroyed modern tanks including the M1 Abrams, the Challenger 2, and the Merkava.

Finally the honor of portable anti-armor system with the largest caliber round goes to the MBT LAW (Main Battle Tank and Light Anti-tank Weapon), a single-use grenade launcher in service with the British Army. Its ammunition has a diameter of 150 mm, and is capable of punching through armor up to 650 mm thick. 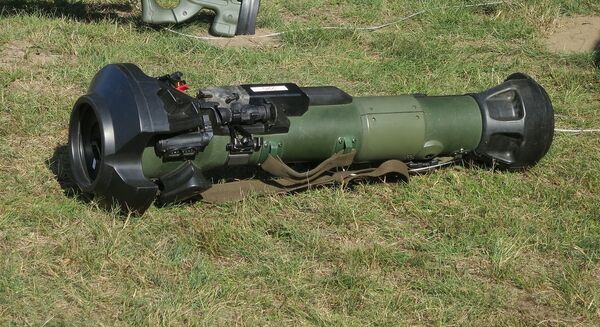 The weapon's operator can manually correct the round's trajectory using onboard electronic equipment and its sighting device. Newer versions of the weapon also include a fire-and-forget mode. The MBT LAW has seen limited battlefield application, since in the British Army's latest deployments (Iraq and Afghanistan) the enemy has had few armored vehicles. The system's ammunition is also quite expensive.