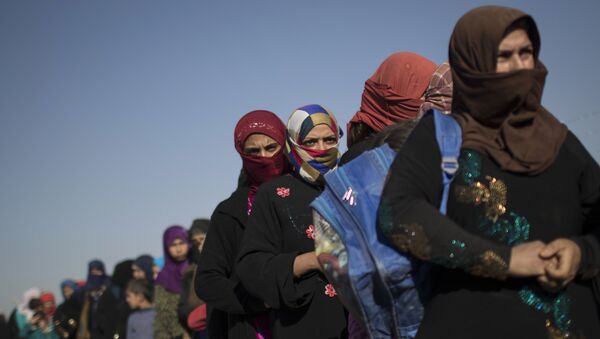 Russia's Commissioner for Human Rights Tatyana Moskalkova told Sputnik Saturday that she was preparing to lodge a request to the United Nations, asking the organization to provide assistance in creating humanitarian corridors for Russian women and children willing to leave the conflict-torn Iraqi city of Mosul.

MOSCOW (Sputnik) — Moskalkova said she had ordered to prepare a request for the United Nations, the Russian Foreign Ministry and Chechen Republic leader Ramzan Kadyrov to help with the establishment of a humanitarian corridor and assist in providing medical aid to those who will be evacuated from the city.

Fourteen Kazakh Nationals Taken Away From Combat Zone in Iraq
The rights commissioner stressed that she would be following the developments of the situation, and expressed her determination to address other international organizations to ensure the creation of the safe corridors if necessary.

Mosul, the second largest Iraqi city, was completely liberated from Daesh terrorists in July. Iraqi forces and US-led coalition forces launched the operation to free the western part of the city in January after recapturing its eastern portion. Daesh terrorist group took over Mosul in June 2014, turning it into one of its major strongholds in the Middle East.

During the occupation and the military operation to drive the terrorists from the city, Mosul's infrastructure was significantly damaged and its population suffered many losses.

UNICEF has assessed that up to 650,000 children in Mosul have been affected by the war. The UN estimated that some 700,000 Mosul residents have been displaced since the beginning of the conflict.