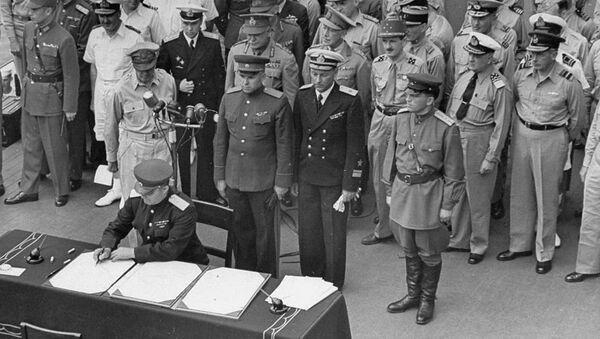 On the occasion of the 72nd anniversary of Japan's surrender to the Allies in World War II, military journalist Alexander Evdokimov explains why Imperial Japan never did end up invading the Soviet Far East during the Great Patriotic War.

On September 2, 1945, Japan signed the act of surrender aboard the USS Missouri in Tokyo Bay, formally bringing World War II to a close. The Soviet Union was represented by Lieutenant-General Kuzma Derevyanko, who signed Japan's Instrument of Surrender, and went on to serve as the Soviet representative at General Douglas McArthur's headquarters during the US occupation of Japan.

In the days and weeks before, the Red Army smashed the million-troop strong Kwantung Army in Japanese-occupied Manchuria, in an operation which US historians would dub 'August Storm' for its scale and lightning speed. In two weeks, Imperial Japan lost 677,000 troops, including 84,000 killed or wounded, with over 593,000 troops taken prisoner. The Red Army suffered 9,800 dead and 24,500 wounded. Many Russian and some historians believe that the invasion of Manchuria contributed greatly to Japan's decision to surrender.

World
'Even the Stones Burned': 75th Anniversary of the Massed Bombing of Stalingrad
For many years, common wisdom has asserted that among the reasons that the Red Army was able to eventually turn the war on the Eastern Front around was the fact that militarist Japan never joined the Nazis in their invasion of the Soviet Union, even during the most desperate moments, when German armies stood at the gates of Moscow in 1941, and at Stalingrad in 1942.

However, as military journalist Alexander Evdokimov points out, even a Soviet defeat in Moscow or Stalingrad probably wouldn't be enough to convince Tokyo to join Berlin in its campaign. In an analysis on the subject, prepared for the occasion of the anniversary of Japan's surrender, Evdokimov outlines five reasons why Japan had no motivation to attack the Soviet Far East.

"As strange as it may seem," the journalist wrote, "the key reason preventing Japan from implementing its militaristic plans against the USSR was the pact concluded with the Soviet leadership by Japanese Foreign Minister Yosuke Matsuoka" in April 1941.

"One might say that a neutrality pact is just a piece of paper, like the one the Nazis signed and then cynically ignored. Yes and no. For while the Nazi leadership couldn't care less about world opinion, their Japanese colleagues obviously did not intend to neglect this aspect. This meant that they would first have to disavow the treaty, half a year ahead of time, and then declare war and start military operations. Basically, this was the same thing the USSR did when it made its preparations to defeat the Kwantung Army in 1945…" 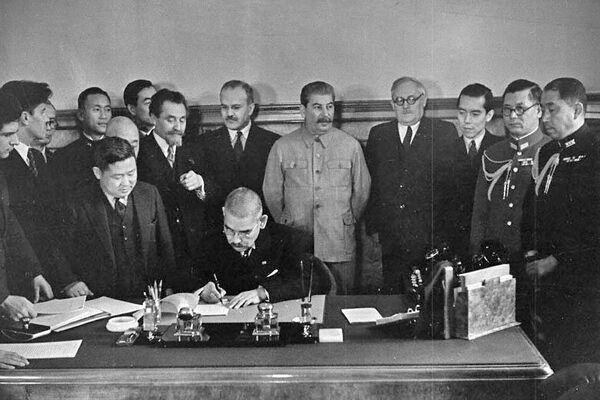 Japan's refusal to disavow the treaty, combined with intelligence reports indicating that Tokyo would not launch an invasion of the Soviet Far East, are widely believed to have been the key reasons behind Moscow's decision to transfer 28 divisions from the Far East to the USSR's western frontiers in late 1941.

#2: The Japanese Defeat at Khalkhin-Gol

World
Molotov-Ribbentrop Pact: 'Soviets Had No Illusions About Nazi Intentions'
In the spring and summer of 1939, Soviet forces and their Mongolian allies defeated Japanese forces and their Manchukuo allies in a series of probing attacks by the Imperial Japanese Army at the Mongolian-Manchuria border. According to Evdokimov, these engagements led Japanese high command to realize that the Red Army was not merely a 'colossus with feet of clay', as was presumptuously assumed in Berlin. "The Japanese military appreciated Soviet strength much more soberly, preferring not only to conclude a non-aggression pact, but to scrupulously observe it."

Just as significant, according to the journalist, is the fact that in contrast to the western Soviet Union, the Soviet Far East simply did not offer opportunities for lightning offensive operations. "The theater [consisted] of endless, nearly impenetrable forests, which would have forced offensive operations to take place along the Trans-Siberian railway, very convenient for defenders and very difficult for the attackers." 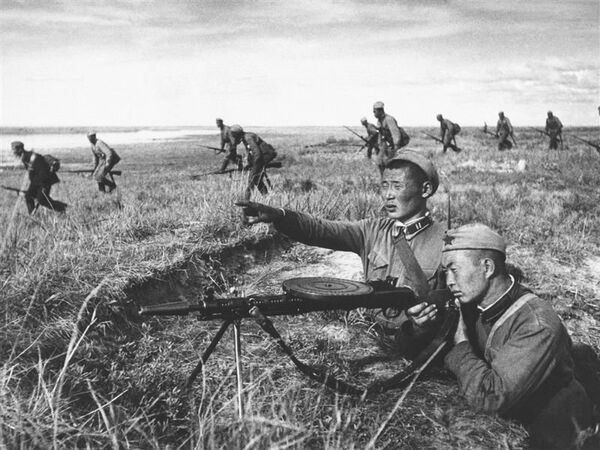 Mongolian troops fight against the Japanese counterattack on the western beach of the river Khalkhin Gol, 1939
CC0 / /

In short, unlike the broad open steppes of western USSR, the Far East offered no easy to gain high value targets. On the contrary, as Japan advanced, they would face the prospects of having large columns of troops cut off and destroyed amid the broad swathes of the Far East and Siberia.

According to Evdokimov, amid any planning for an invasion of the USSR, Tokyo could not help but reconcile itself to the fact that the Soviets would be joined by some stubborn and powerful allies. "This includes China, which was fighting the Japanese aggressors for every inch of its territory, and Mongolia, which together with the USSR gave Japan a rather unpleasant surprise in 1939" at Khalkhin-Gol.

"By 1941, Japan was bogged down in bloody battles with red China, led by Mao Zedong, and the Kuomintang. This war was no cakewalk for the Imperial Army. Of Japan's nearly 2 million military dead in WWII, the Pacific theater cost 300,000. The battles against the Red Army in 1945 cost less than 100,000. The main irrecoverable losses were incurred in China."

Finally, in December 1941, after Japan attacked Pearl Harbor and awoke the American sleeping giant, any prospect for an attack against the Soviet Union was closed for good. Attacking under these circumstances would mean putting themselves in the same situation as the Nazis after June 6, 1944, "i.e. stuck between the Soviet hammer and the American anvil." 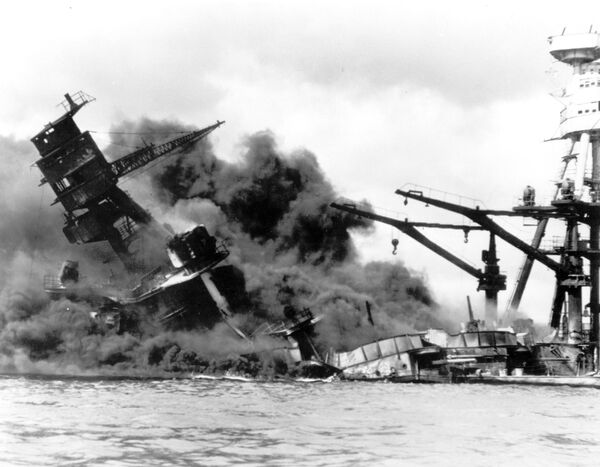 In this photo, the battleship USS Arizona belches smoke as it topples over into the sea during a Japanese surprise attack on Pearl Harbor, Hawaii, December 7, 1941.
© AP Photo

#4: Tokyo's Understanding That the Nazis Would Lose

In Evdokimov's view, Japanese diplomats' probing for the prospects for a peace treaty between the Soviet Union and Nazi Germany in both 1941 and 1942, while unrealistic, indicated that Tokyo probably realized that without such peace, it and its partners in the Berlin-Rome-Tokyo axis would be doomed to defeat. Unfortunately for Tokyo, the plan was absolutely unrealistic, "because the Nazi elite, perhaps up to the moment when they faced direct fire in [Hitler's bunker in Berlin in 1945], could not understand that they was doomed."

August 8, 1945: Nuremberg Charter Sets Out Procedures for War Crime Prosecutions
"Tokyo was more pragmatic, but did not have any significant leverage on Berlin. And they themselves did not follow in the wake of Nazi policy, either. After the Third Reich declared war on the US, their partners from the Land of the Rising Sun did not reciprocate by declaring war against the Soviet Union."

#5: The Lack of an Economic Basis for War Against the Soviet Union

Finally, Evdokimov noted, there was the fact that Japan had no economic basis to attack the USSR. "All wars, even the most ideological ones, start for economic reasons…Put simply, in the case of the Soviet Union and Japan in 1941-1942, the countries simply had nothing to fight over. Therefore, a major role in Japanese hawks' choice of a direction for their aggressive plans was played by purely economic reasons."

In other words, where a 'southward' invasion meant the quick capture of easily obtainable territories and natural resources, including food and oil, an attack on Japan's cold and barren northern neighbor offered no quick gains.

Furthermore, the journalist noted, "a war with the USSR would have become an even more severe test for the rather weak pre-war Japanese economy than its fight against the United States. Hundreds of thousands or even millions of troops would have to be thrown into battle at once; they would have to be fed, dressed, washed, would need medical treatment and would have to be evacuated when injured." Calculating these expenses, the Japanese militarists decided to throw their naval and air forces against the US and its allies in Asia instead.