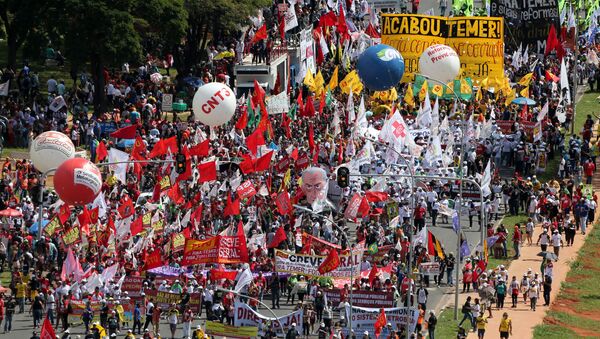 Brazil may be embroiled in a corruption scandal that has implicated the Brazilian federal government at the highest levels, but the political strife hasn’t carried over to the Brazilian economy. Brazil’s GDP outpaced expected growth in Q2 2017 as part of their recovery from the nation’s most significant economic downturn in a century.

The Brazilian Institute of Geography and Statistics (IGBE) reported that falling inflation and interest rates were doing wonders for Brazil's economic recovery. GDP grew 0.2 percent over the quarter, instead of the 0.1 percent that had been projected.

For the first time since 2014, household spending increased. This was due to a government measure allowing employees to draw money from their unemployment funds if they so chose, injecting $14 billion back into the economy between March and July.

"The pace of investments in 2018 will determine whether GDP will grow 1.5 percent or 3 percent," he added.

Brazil is by far the largest economy in South America — its economy makes up 48 percent of the continent's GDP even after two years of drastic recession.

The economic rebound may prove a blessing to beleaguered Brazilian President Michel Temer, perhaps the single most unpopular leader in the world today. An Ibope poll from July 2017 placed Temer's approval ratings at an impressively low 5 percent.

Temer has enacted a policy of austerity: cutting interest rates to attract foreign investment and reducing Brazil's staggering fiscal deficit. This has proven enormously unpopular in a nation with extremely high unemployment. That, along with numerous charges of corruption and narrowly avoiding jail time, has brought Temer's approval ratings to historic lows.

Even with austerity, however, foreign investment continues to shrink in Brazil. The freefalls of 2015 and 2016 are over, replaced with a trickling decline of 0.7 percent over Q2. Foreign investment now makes up 15.5 percent of Brazil's GDP — the lowest rate since Brasilia began tracking it in 1996.

"It really is amazing how much investment has shrunk," said Goldman Sachs economist Alberto Ramos. The slowdown "hampers productivity and will conspire against growth going forward."