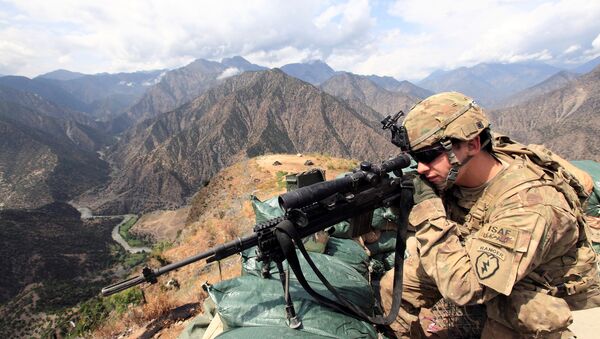 President Donald Trump’s new strategy on Afghanistan will keep losing the war there because the United States has no credible options left to apply in the country, analysts told Sputnik.

WASHINGTON (Sputnik) — On August 21, Trump announced a new strategy of giving more freedom to US military commanders to use force in Afghanistan and pledged to keep US forces fighting there until extremist threats to the country were eliminated.

No Decision Yet on US Troop Numbers for Trump's Afghanistan Surge - Pentagon
Trump said he had decided to send more US troops, but made clear he would not announce public the specific numbers. He also said US military commanders were ordered to focus on destroying terrorist forces and to abandon all efforts at nation-building in Afghanistan.

Previous US presidents George W. Bush and Barack Obama both followed nation-building policies of trying to create an effective centralized state in Afghanistan as well as train and equip the country’s new armed forces.

However, after 16 years of those policies, the Taliban has regain control of more of Afghanistan than they had since being militarily ousted by the United States and its allies in November 2001.

Currently, the Afghan National Army remains dependent on massive US air support, logistics, and elite forces, despite more than $1 trillion in estimated US expenditures.

Nothing Trump announced in his new strategy can salvage the situation from all those years, of expensive and bungled efforts, foreign affairs analyst and political commentator Dan Lazare told Sputnik.

"The United States has created such a disaster in Afghanistan that, regardless of whether it escalates or pulls out, it can only make matters worse," he said.

The previous ruling Taliban were in the ascendant and the current US-backed government could not alone cope with the resurgent threats of al-Qaeda or the Islamic State terror groups (both outlawed in Russia) either, Lazare observed.

"In truth, the United States has the wolf by the ears. If it lets go, the Taliban will be back in power as soon as the last helicopter lifts off from the US embassy, followed in short order by al-Qaeda and the Islamic State," he said.

The US armed forces also had to remain in Afghanistan because the country was so chaotic from previous US policies that otherwise its anarchy and terrorism would spread across Eurasia, Lazare stated.

"Jihad will spread throughout Central Asia, affecting both Russia and China. Social collapse will intensify," he said.

Nevertheless, the cost in lives, military commitment and money in maintaining a credible US presence in Afghanistan would be prohibitive with no end in sight, Lazare noted.

"If, on the other hand, the United States opts to hold on, the only effect will be to sacrifice more American lives at a time of mounting political unrest back home while Trump's warlord allies continue eating away at Afghan society from within," he said.

Trump had therefore been faced with a situation where he had no good policy course open to him and the position the United States finds itself in is a result of its policies, Lazare pointed out.

"The options are jihad versus a somewhat longer course involving corruption, bloodshed, a pointless military build-up and then, ultimately, jihad as well. It's a Hobson's choice that is entirely of America's own making," he said.

Lazare noted that the plunge of Afghanistan into civil war and Islamist terror did not begin in 2001 when the United States invaded the country to oust its Taliban government and in a vain effort to destroy al-Qaeda, but 22 years earlier in 1979.

Lazare recalled that President Jimmy Carter and his National Security Advisor Zbigniew Brzezinski decided to arm and finance Islamic radicals to topple the secular Afghan government that was supported by Moscow.

"The United States plunged the country into murder and mayhem in mid-1979 by channeling money and arms to jihadis outraged that a revolutionary new government in Kabul insisted that their daughters learn to read," Lazzare said.

As a result, Afghanistan was launched on a long era of chaos and despair that facilitated the growth of radical Islamist forces, Lazare explained.

"The upshot was Russian intervention, civil war, and then victory on the part of US and Pakistani-backed warlords in 1992. Thanks to US intervention, the miniskirt gave way to the burka," he said.

In October 2001, the United States invaded Afghanistan outright and installed the warlords back in power, Lazare added.

"The consequences were predictable: corruption, anarchy and a jihadi movement that was once again on the rebound," he said.

Trump had inherited these despairing conditions, but he had failed to offer any kind of realistic framework in which to address them, Lazare remarked.

Moreover, Trump had set a meaningless goal by promising to achieve an honorable and enduring outcome to the long Afghan war, he added.

"No one knows what such words mean beyond maintaining the chaos at semi-manageable levels. It's political bombast at its most meaningless," Lazare said.

Pentagon Confirms 11,000 US Troops in Afghanistan - Joint Staff Director
Retired US Army colonel and military tactician Doug Macgregor agreed that Trump would be unable to turn 16 years of failure into success and victory in Afghanistan.

Trump’s inevitable failure in Afghanistan was rooted in his blind reliance on the advice of US military leaders who had an unbroken record of strategic failures going back generations, Macgregor explained.

"Trump opted to drink deeply from the poison well of American generalship; a well of uncreative minds concerned more with self-promotion than the fate of the nation, as removed from the reality on the ground in Afghanistan as is the chess player from the chessmen on his board," he said.

Trump failed to realize that unsuccessful generals cannot be transformed into effective ones, and that they need to sacked and replaced with new figures capable of creating new strategies, Macgregor noted.

Instead of revering veteran commanders who could only present a heritage of expensive failures, Trump should have followed the example of Russian President Vladimir Putin and shown himself ready to fire worn-out generals and replace them with fresh figures, Macgregor maintained.

Putin had intervened actively to renew the quality of leadership in the Russian army by firing a previous generation of commanders, Macgregor said.

"Putin… had the good sense to remove hundreds of generals. The Russian Army continues to benefit from his action!" he stated.