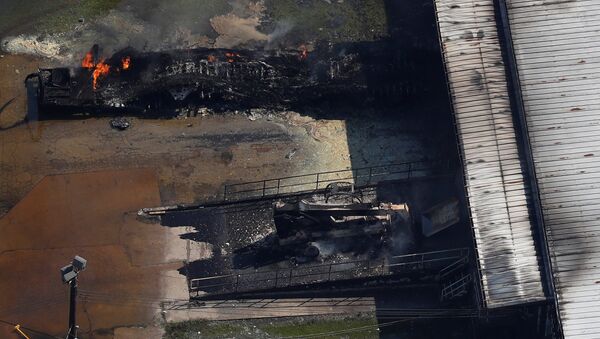 Arkema CEO Richard Rowe told reporters on Wednesday that there was nothing left that they could do to prevent an explosion at the facility. Since refrigeration is required to keep highly explosive organic peroxides in a homeostatic environment, the loss of electricity due to massive flooding brought by Hurricane Harvey as well as the failure of back-up generators meant the materials could not be kept at the temperatures needed to for them to remain stable.

​A massive plume of black smoke has appeared.

Strangely, though, the Environmental Protection Agency (EPA) said their analysis of the smoke did not result in any reasons for concern. Fifteen first responders were taken to hospital after inhaling the fumes and were quickly released. ABC reports that a total of 18 people have been injured since the plant started burning.

"Of immediate concern for residents around the plant is smoke," a FEMA release from Thursday said. "The smoke from the fire is especially acrid and irritating. Those with heart problems or respiratory conditions, such as asthma or emphysema, may be particularly sensitive."

Officials cordoned off a 1.5 mile (2.4 kilometer) radius surrounding the plant, which is located about 25 miles northeast of downtown Houston, the fourth-largest city in the US.

Arkema's CEO said the environmental impacts from the fire would be "minimal," though Neil Carman, clean air director for the Sierra Club's Lone Star chapter, told the Texas Tribune "That is not good. That is not good. That's a big concern … This is uncharted territory. In 37 years I have never heard of anything like this happening."

​Stunningly, Rowe "refused to release the company's federally mandated risk management plan or the plant's chemical inventory" during a briefing with reporters on Wednesday, the Texas news outlet said. ​

The best path forward is to "let these fires happen and let them burn out," Arkema spokeswoman Janet Smith told the AP Friday evening.

"Some organic peroxides will decompose very rapidly or explosively when exposed to heat, friction, mechanical shock, or contamination with incompatible materials … Extinguishing organic peroxide-fed fires is extremely difficult since the chemical provides the necessary oxygen to support combustion," the manual states.

Sam Mannan, professor of chemical engineering at Texas A&M University, tells CNN whether the effects from the plant's smoke will be "reversible" or "irreversible" remains to be seen.

By Friday evening, Arkema had revealed that two trailers of unstable compounds had caught fire, and that six more trailers are expected to eventually explode or go up in flames as well.