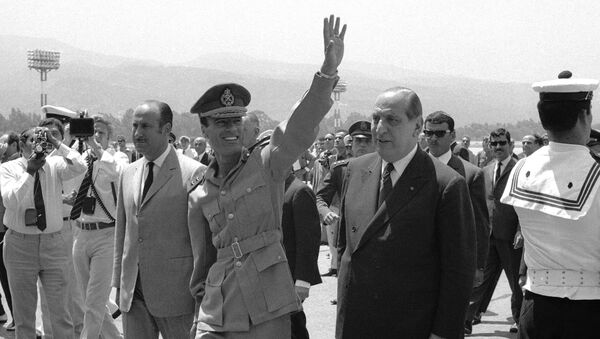 On September 1, 1969, a group of young Libyan army officers known as the Free Officers Movement (FOM) staged a bloodless revolution. The country's leader, King Idris, was overthrown – and the reins of power taken up by Muammar Gaddafi, a 27-year-old Libyan army captain. He would lead the country for the next 41 years, until his violent removal.

The FOM launched their coup in Benghazi, Libya's second-most populous city — within two hours, it was successfully completed, with the wholehearted support of the country's army. The vast majority of Libyan citizens welcomed the change — neither resistance nor deaths or casualties were reported during or after the action.

On this day in 1969, Gaddafi (then just 27 years old) seized power in a military coup. Here's how the @guardian reported it. #Libya pic.twitter.com/UpmV50kB3l

On September 1, the group proclaimed Libya a free and sovereign state, which would pursue "the path of freedom, unity, and social justice," allowing the country to move forward as "free brothers" to a new age of prosperity, equality, and honor.

Moreover, it made clear the country's existing treaties and agreements would remain in effect, and foreign citizens and their property would be protected.

Diplomatic recognition of the new government was rapid the world over — the US recognized the government's legitimacy September 6 and even King Idris' designated heir, Hasan ar Rida, publicly renounced all claims to the throne, and made clear his support for the new government, calling on Libyans to accept it without violence. 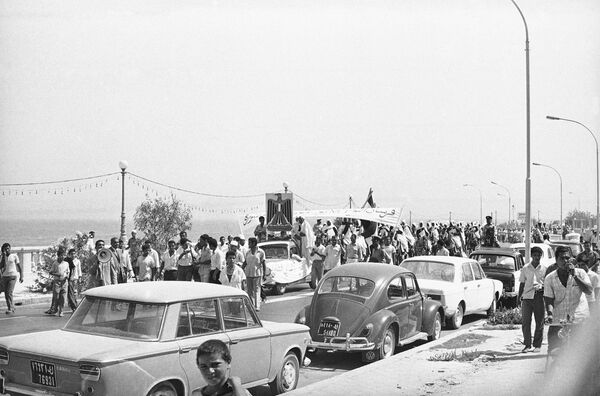 A crowd of about 1,000 Libyans gather in streets of Tripoli on August 5, 1970, shouting greetings and slogans of support for Col. Moammar Gadhafi, head of the Libyan Revolutionary Command Council and Premier of Libya.
© AP Photo

Nonetheless, the FOM made clear Libya would be a neutral, non-aligned state in the Cold War, and opposed all forms of colonialism and imperialism within and without the country.

The new government rejected communism, espousing instead a permutation of socialism that integrated Islamic principles with social, economic, and political reform.

Housing became a human right, a state bank which provided loans at zero percent interest was established, and electricity, education and medical treatment became free at the point of use. Much of this was funded by Libya's sizeable oil wealth — in 1973, he took control of foreign-owned oil fields in the country, nationalising them in order to benefit the public.

​Gaddafi's efforts paid demonstrable dividends — when he came to power, around a quarter of Libyans were literate, and by the time of his ouster, this total had climbed to 87 percent.

Moreover, under his reign, Libya was home to perhaps the best healthcare service standards in the Middle East and Africa, and if Libyan citizens couldn't access their desired educational courses or medical treatment in Libya, they were funded to seek it abroad.

Perhaps predictably, the Colonel's radical reformism quickly proved extremely troubling to Western leaders. In some respects, such concerns were arguably justified — oil plutocrats were not the only Western elements in the country Gaddafi sought to extricate.

As part of a wider drive for an independent Libya — and indeed, an Africa — free from foreign interference, Western military installations were removed from the country, and his government even went as far as to finance a wide variety of extremist groups worldwide, from Palestinian guerrillas and Philippine Muslim rebels to the Irish Republican Army.

In 1986, Gaddafi was accused of arranging the bombing of a discotheque in West Berlin, frequented by US soldiers, which killed three and injured 229. US response to the attack was savage — on top of imposing a crippling sanctions regime, the US Air Force, Navy and Marine Corps carried out a concerted one-day campaign of airstrikes against the country, which killed up to 30 civilians.

One target was Gaddafi's official residence, leading many to suggest the campaign was intended to kill the Libya leader.

In 1998, a former MI6 agent turned whistleblower, David Shayler, claimed in MI6 had paid the Libyan Islamist Fighting Group to kill the Colonel in 1996.

In the event, the operation was bungled — the bomb detonated under the wrong car, killing six innocent people instead.

Western powers would finally get their apparent wish in 2011. The "Arab Spring" swept across the Middle East and North Africa, and Gaddafi's Libya was gripped by civil war. Zealous insurrectionists, among them many Libyan exiles, flooded into the country from all over the globe — and with the help of a NATO air campaign, led by the US, UK and France, the Colonel was deposed, his gruesome murder at the hands of rebel forces recorded and televised by mainstream news outlets the world over. 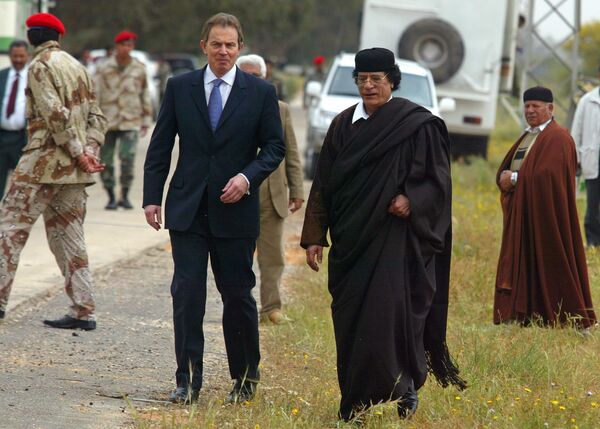 While presented by politicians and journalists alike as a spontaneous, popular rebellion, subsequent exposures suggest the brutal elimination of Gaddafi might not have been quite so impromptu or proletarian.

In the wake of the May 22 Manchester arena bombing, it was revealed the UK government operated an effective "open door" policy allowing Libyan exiles and British-Libyan citizens to travel untrammelled to the country, for the express purpose of insurrection. Among them was the father of Manchester attack bomber Salman Abedi himself.

In essence, several former rebel fighters now back in the UK claimed they were able to travel to Libya "no questions asked," and their voyages were actively facilitated by authorities. Many had been subject to  "control orders" — effective house arrest — as soon as the Libyan "civil war" began, these restrictions were lifted and their passports returned.

One individual en-route to the war-torn country even alleged he was detained at an airport by security officials, and asked by an MI5 officer whether he was "willing to go into battle." When he responded affirmatively, he was told British government had no issue with anyone who wished to fight against Gaddafi, and given a number to ring if he was ever detained by UK authorities in future.

Libya Before & After American 'Democracy' pic.twitter.com/QK7unc8SEr

​While the fall of Gaddafi was hailed unanimously in the Western mainstream, six years on the country is a husk of its former self. 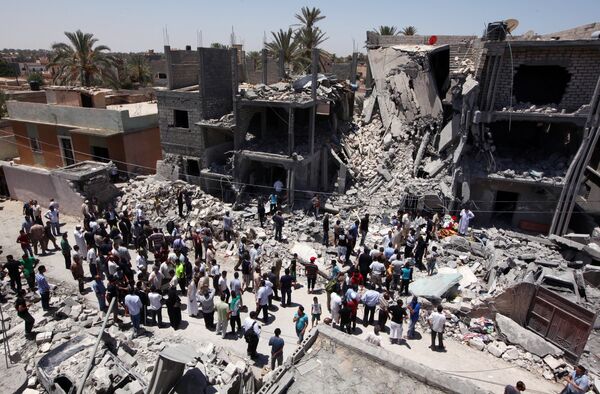 Tripoli is now a lawless city state administrated by violent militias, along with many other regions of Libya, and areas of the country have also become strongholds for Daesh and other extremist groups.

In late October 2014, Libya's macabre condition was unambiguously underlined by an Amnesty International report, which concluded that: