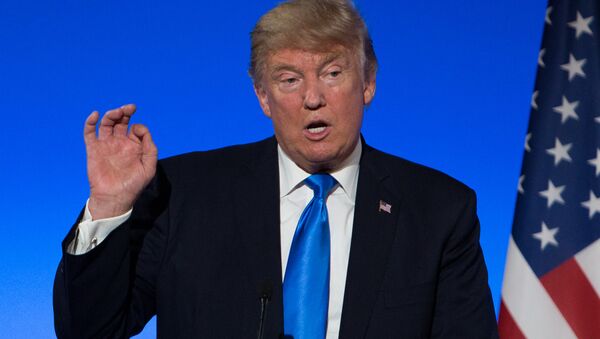 No Decision Yet on US Troop Numbers for Trump's Afghanistan Surge - Pentagon
WASHINGTON (Sputnik) — Trump announced his new Afghan strategy in a nationally televised speech earlier this month. He said the United States was committed to destroying extremist groups in Afghanistan and refused to publicly announce troop levels or timetables for increases in forces operating there or for their withdrawal.

On Wednesday, however, Defense Department Joint Staff Director Lt. Gen. Kenneth McKenzie said in a press briefing that the United States had 11,000 troops stationed in Afghanistan. The number is 2,600 higher than the previously announced one because the Pentagon has included other categories of troops.

"This is less a new strategy than a compromise between Trump and his bureaucratic security state advisers," Kwiatkowski said.

Trump had been forced to accept the basic demands of his national security advisers but remained cautious and skeptical in his expectations for the new program, Kwiatkowski explained.

"It is… a move whereby Trump gives (after seven long months of bureaucratic pressure) some ground and appears to be supporting of previous policy, but implies his expectations," she said.

Kwiatkowski suggested Trump, who was highly critical of US strategies in Afghanistan during his 2016 election campaign, still reserved the option of changing the policy if it proved demonstrably to be unsuccessful.

"Trump’s strategic game here may be to give the Pentagon enough rope to hang themselves," she said.

Trump’s career in US business had taught him to act swiftly to cut his losses and pull out of deals and companies whose operations were failing, contrary to his pledge on August 21 to stay the course in the Afghan conflict Kwiatkowski recalled.

"This speech [was] contrary to his instincts and his style — which is to get out of bad deals earlier rather than sooner," she said.

However, the new policy would defuse for the moment political pressure on trump from both conservative and liberal hawks for him to expand the Afghan war, Kwiatkowski observed.

The new strategy "certainly will get the generals, other beneficiaries of the 17 year war in Afghanistan, and those using the permanent bases we have constructed there, out of his political way for the next few months," she noted.

Trump also threw responsibility for winning thaw r on his own generals and military bureaucracy by offering them a free hand to do what they wanted in the war, Kwiatkowski pointed out.

"By ‘agreeing’ with a shaky interventionist argument and establishing parameters of success for an impossible goal (and this includes changing the way Pakistan operates) Trump has put the ball in the US security bureaucracy’s court," she said.

Top US military officials had assured Trump they could succeed militarily against criminals and desperadoes if given marginally more time, freedom, resources and better allies, Kwiatkowski recalled.

However, "success will be impossible to achieve, and when they come back to Trump with more excuses and more demands, Trump will have the political upper hand," she said.

The kind of "surge" policy that trump had approved had failed in the long run in every previous war where the United States had applied it, Kwiatkowski stated.

"Surges, unleashing local US commanders on the ground, minor changes in strategy in both Iraq and Afghanistan have not historically brought ‘wins’ or success," she said.

A major reason for this was that unleashing no-holds-barred firepower shattered the structure of civil societies and allowed ruthless, well-organized extremist groups to take them over, Kwiatkowski explained.

All-out US military operations "have in many cases simply destroyed more infrastructure and increased the local necessity of gray and black markets in goods, services, and leadership and increased terrorism as the predictable response of weak locals… to the brutality of the invaders," she said.

Trump’s new strategy in Afghanistan bases the criteria for withdrawing US troops on fulfillment of certain requirements rather than on a time-line.