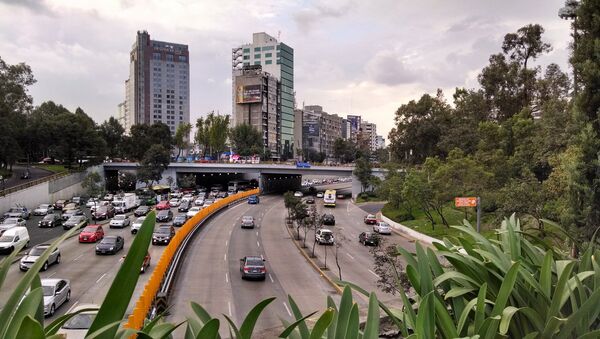 The United States, Mexico and Canada will hold their second round of renegotiations of the North American Free Trade Agreement (NAFTA) in Mexico City from September 1-5 as tensions rise between US and Mexican leadership over the future of the accord’s very existence.

Mexico, US Agree to Continue Talks on NAFTA Overhaul – Mexican Foreign Ministry
WASHINGTON (Sputnik) — US Trade Representative Robert Lighthizer, Canadian Foreign Affairs Minister Chrystia Freeland, and Mexican Secretary of the Economy Ildefonso Guajardo are leading delegations from their respective countries during the NAFTA negotiations, the first round of which took place August 15-20 in Washington.

The delegations, during round one, held meetings with experts on more than two dozen topics, Global Affairs Canada said in a press release on August 21. All three countries, the release said, want an accelerated negotiation process to update the agreement to 21st century standards.

Since the first round of NAFTA negotiations concluded, however, the United States and Mexico have exchanged harsh words and warnings to such a degree that the very existence of the deal might be at stake in the second round.

US President Donald Trump demanded a revision of the 23-year-old NAFTA deal during his presidential campaign in 2016 and has threatened to pull the United States out of the pact to cut the US trade deficit because of factory closure and job losses.

Trump has continually called it a one-sided deal that hurts the American economy and renewed this theme earlier this week.

"I do not think we can make a deal," Trump said at a rally in Phoenix, Arizona on Tuesday. "I think we will end up probably terminating NAFTA at some point."

On Wednesday, Foreign Secretary Luis Videgaray said Mexico would walk away from the table if the United States began the six-month long process of withdrawing from the accord, according to EFE news agency.

Guajardo earlier this week said Mexico should consider alternative plans because negotiators could reach an impasse during the upcoming sessions.

The dismantling of NAFTA, however, some experts have claimed, could have significant wide-ranging negative consequences including the potential to trigger a US recession or even a global financial crisis.

US-Mexico trade through NAFTA is valued at more than $500 billion and has created some five million jobs across the United States. In addition, Mexico is the top export market for the US states of Texas, New Mexico, Arizona, and California, hence Washington faces immediate negative ramifications once the deal ends.

The economies and supply chains of the United States, Canada and Mexico are highly integrated and severing the deal will likely be extremely disruptive to all three countries.

"A regional recession among the NAFTA 3 involves a hemispheric economy that is big enough to tip the global economy into recession, as well," Fullerton, who is also Chairman of the Study of Trade in the Americas, said.

Mexico would likely enter a recession caused by lost sales and ensuing output declines, Fullerton said. The peso would depreciate against the US dollar and result in higher inflation in Mexico, he added.

The United States would likely fall into a stagflation, experiencing negative GDP growth, high unemployment and high inflation, Fullerton said. A US withdrawal would only create downside risks if it chose to leave the three-party accord, he added.

Mexico is searching for a back-up plan to address a potential collapse of NAFTA if Trump decides to pull the United States out of the deal, although there is differing views on whether that is necessary.

"Mexico does not have an ‘option B’ scenario," Coordinator of the Center for Chinese-Mexican Studies National Autonomous University of Mexico, Enrique Dussel Peters, told Sputnik. "There has been a fashionable discussion on Mexico ‘diversifying’ its trade with Asia and China, but with no real steps and effects so far."

Mexico may not need an immediate back-up plan, however, Dussel argued, because the cancellation of NAFTA may have a surprisingly low impact on Mexico’s economy in terms of trade and tariffs.

Dussel Peters added that the termination of NAFTA would not have a big impact in the short run because of the high trade integration between the United States and Mexico.

"Canadian businesses have gained a great deal from NAFTA in Mexico — most specifically in the mining and financial sectors. It of course, has lost manufacturing jobs to Mexico as well," Griffin said.

Griffin also suggeted that should the US withdraw from NAFTA, "Canada and Mexico will construct a bi-lateral trade deal, perhaps similar to those Canada has negotiated with other Latin American countries."

Although not all is doom and gloom, however, considering that during a phone call on Thursday, Trump and Canadian Prime Minister Justin Trudeau expressed hopes that an agreement on NAFTA can be reached by the end of 2017, according to a White House spokesperson.

US Trade Representative Robert Lighthizer on May 18 sent an official letter to members of Congress notifying them about President Donald Trump’s intention to revise and renegotiate the deal in the areas of regulatory practices, laborers' rights, intellectual property, customs procedures, and state-owned enterprises.

NAFTA establishes a free trade area between the United States, Canada, and Mexico which went into effect on January 1, 1994. The agreement outlines principles and rules of international commerce, aims to promote fair competition and expands the parties' investment options. The main part of the accord, also known as rules of origin, states that products should meet minimum NAFTA content requirements to qualify for preferential tariff treatment. Under the existing deal, goods wholly produced in a NAFTA area, those manufactured from originating materials or containing 60 percent regional value can receive an appropriate certificate.

Trump administration negotiating objectives also include adding a digital economy chapter and incorporating and strengthening labor and environment obligations that are currently in NAFTA side agreements. The United States will also seek to create a mechanism to deter currency manipulation, according to a USTR document.