India, Switzerland to Cooperate on Black Money After Impact of Demonetization 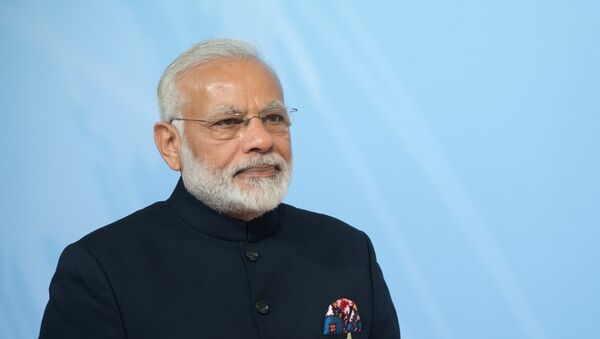 New Delhi (Sputnik) — India's Prime Minister Narendra Modi thanked the Swiss president for her country's support for India's entry into the Nuclear Supplier's Group (NSG) as well as for supporting the country's membership in the Missile Technology Control Regime (MTCR).

"We had productive talks on international, regional and bilateral issues," Modi said at a joint press event with Leuthard.

The Swiss president was hopeful that the law on automatic exchange of information would be cleared by the Swiss Parliament by the end of the year.

However, the highlight of the bilateral meeting was the resolve by the two leaders to tackle black money and tax evasion as Swiss banks are considered a haven for hoarding black money by many among India's richest.

The rationale given by the current establishment for demonetization was that the bulk of Rs 500 and Rs 1000 notes were stored as illicit wealth, besides being easily counterfeited to fund illegal activities. Ten months later, it seems Indians have deposited nearly all the currency bills voided by PM Modi, denting the central bank's profit and dealing a blow to his drive to unearth unaccounted wealth.

The Reserve Bank of India's annual report on Wednesday said banned notes worth INR 15.28 trillion ($239 billion) made its way back to the bank. This amounts to 99 percent of the nearly INR 15.44 trillion ($240 billion) of the old high-denomination notes that were in circulation before the 8 November announcement, according to the finance ministry data.

The Modi government's critics were quick to seize the opportunity to term the policy as a major failure. Former finance minister P. Chidambaram even questioned: "whether the scheme was designed to convert black money into white?"India's Finance Minister Arun Jaitley defended the demonetization drive claiming that the entire amount of money deposited in bank accounts could not be termed legitimate money.

"The real object of demonetization was formalization, attack on black money, less-cash currency, bigger tax base, digitization, a blow to terrorism. And we do believe that in each of these areas, the effect of demonetization has been extremely positive. The fact that money got deposited in banks doesn't make it legitimate money," he said, adding the country was ready for demonetization even though there was political resistance.

Nevertheless, experts are divided on the cost and benefits of the demonetization.

"This data proves that demonetization was a total failure. The prime minister obviously had overstated his case. You've lost so many jobs across sectors. How can people trust Mr. Modi and his numbers?" Bloomberg quoted Mohan Guruswamy, chairman of New Delhi-based Centre for Policy Alternatives. Guruswamy had advised the first BJP government at the center under PM Atal Behari Vajapayee.