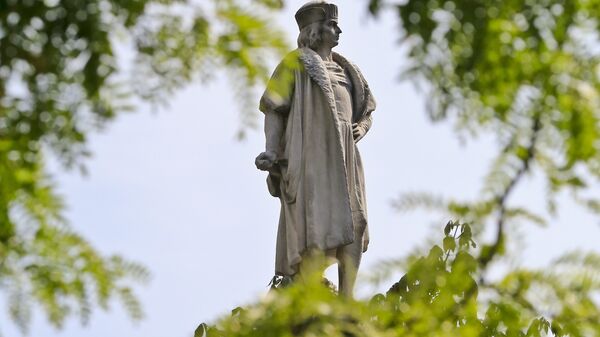 © AP Photo / Bebeto Matthews
Subscribe
International
India
Africa
Columbus Day is no more in Los Angeles after city leaders voted to join several other major US cities in changing the federal holiday’s name to Indigenous People’s Day, to honor Native Americans instead of the explorer credited with launching the mass suffering and widespread extermination of indigenous people.

The states of Alaska and Hawaii, as well as a number of cities including Albuquerque, Portland and Seattle, have also replaced Columbus Day, which officially became a US holiday in 1937 to commemorate Columbus’ 1492 arrival in the Americas.

On Wednesday the Los Angeles city council voted 14-1 to shift the holiday’s focus to indigenous and aboriginal people, despite outcry from Italian-American civic groups.

After the vote Councilman Mitch O’Farrell said, "The historical record is unambiguous and today is a moment where we took a step that is righteous, that is just, that is healing and that is historically clear."

In recent years, the perception of European settlement in the Western hemisphere has shifted from a manifestation of noble ambition to one of genocidal repression, which has helped garner support for Indigenous People’s Day.

There was heated debate between Native Americans and Italian Americans before the vote over whether Columbus should be remembered as a pioneer or a mass murderer.

John Giovanni Corda, a resident of Beverly Hills who opposed the change, said, "Why don’t you stop picking on Christopher Columbus as though you’re picking on our people … We never hurt you. We never wanted to hurt you," according to the Los Angeles Times.

Fifth-generation Italian Councilman Joe Buscaino suggested that instead of focusing specifically on Native Americans, Columbus Day could be replaced by a day that  acknowledges "all of the diverse cultures in the city." Citing past discrimination against Italian Americans, he argued that the city shouldn’t "cure one offense with another."

"To make us celebrate on any other day would be a further injustice."

City employees will still enjoy a paid holiday, whatever it is called.