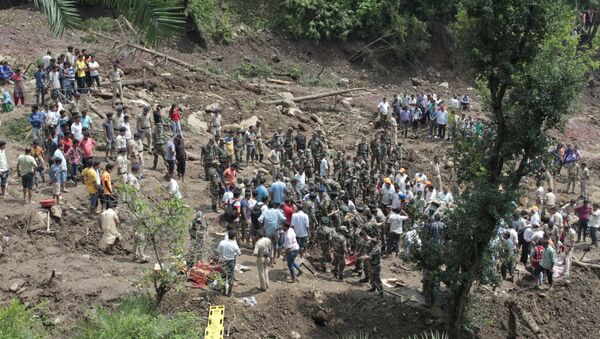 © AP Photo / Shailesh Bhatnagar
Subscribe
A thousand or more people have been killed and almost 41 million people in three countries have been affected by floods across South Asia this summer, with more rain on the way.

The United Nations reports that nearly 1,000 have died as a result of the massive flooding, but other rescuers and aid groups put the death toll as high as 1,200. With intense downpours continuing on Tuesday because of monsoon rains, which fall from June until September, the death count is expected to increase.

In Nepal, thousands of homes have been obliterated by the rains and flooding and dozens of people have been killed. Disease is also beginning to spread in Nepal, as people seek shelter under plastic tarps in cramped, enclosed spaces.

The rain has had disastrous effect in India, which on Tuesday swamped Assam, Bihar, Odisha and West Bengal, among other states, causing roads and schools to shut down and cars to be almost entirely submerged by water, the New York Times reported.

"I could not find any mode of transport and spent my night on the streets instead of trying to reach home," 62-year-old Gangadin Gupta from Mumbai told the paper.

"Five people have died in the Mumbai floods. Four of them, including two children, died due to wall collapse in the slums and another person died due to electric shock," Tanaji Kamble, a local government official, told AFP.

"We are monitoring the safety situation across the city and things are returning to normal," Kamble added.

The east Indian state of Bihar has been particularly affected, with more than 500 people dead this monsoon season.Indian Prime Minister Narendra Modi flew over Bihar this past weekend and promised millions of dollars in assistance.

Bangladesh has also suffered the wrath of the monsoons. According to the International Federation of the Red Cross and Red Crescent, more than 8 million Bangladeshis have been impacted by the flooding, at least 140 people have died and almost 700,000 homes have been destroyed.

A Red Cross spokeswoman in Bangladesh was shocked by the rains' devastation.

"All I could see was water, the whole way," Corrine Ambler said. "You have tiny little clumps of houses stuck in the middle of water."

Matthew Marek, who is in charge of the International Federation of Red Cross and Red Crescent Societies in Bangladesh, also commented on the direness of the situation: "Right now the focus is not on rescue," he said. "The focus is on actually delivering aid — food, clean drinking water, as well as assistance in the form of hygiene items, et cetera."

The Red Cross in Bangladesh has asked for about $4.9 million from the international community for relief efforts.

"This is the severest flooding in a number of years," spokesperson for the International Federation of Red Cross and Red Crescent Societies Francis Markus said.

Markus also commented on the situation in Houston, Texas, following Hurricane Harvey, which has flooded that city's streets and left tens of thousands homeless. "We hope people won't overlook the desperate needs of the people here because of disasters closer home."