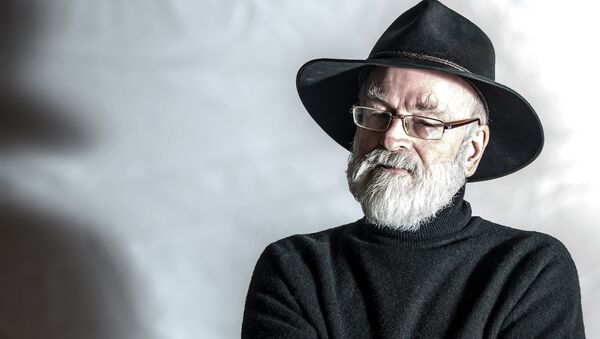 A hard drive with the unfinished works of world-famous British novelist Terry Pratchett has been crushed by a steamroller. This was according to instructions left by the writer before his death.

The author's hard drive was destroyed by a vintage John Fowler & Co steamroller just a few weeks before the opening of an exhibition dedicated to his life and work.

According to the novelist's close friend Neil Gaiman, it was Pratchett's idea to destroy everything he was working on before his death in such an unusual way.

In an interview with The Times, Gaiman said that Pratchett had wanted "whatever he was working on at the time of his death to be taken out along with his computers, to be put in the middle of a road and for a steamroller to steamroll over them all."

One lousy steamroller, ten unpublished novels and look at all the trouble I'm in…! pic.twitter.com/c1da6BTETj

On Friday, the manager of the Pratchett estate, Rob Wilkins, posted on his Twitter a picture of the crushed hard drive. The disk will become one of the showpieces during the upcoming exhibition in the Salisbury Museum.

There goes the browsing history… Many thanks to @steamfair. Soon to be on display at @SalisburyMuseum in September https://t.co/Di8tvTO4Hi pic.twitter.com/onGGWLDYL4

​Pratchett's fans vividly discussed the move on Twitter and other social networks.

Completely get why you've done this Rob. Still doesn't stop it being tragic though

I'm disappointed in the performance of steamrollers right now. #expectedmoreflatness

Over his lifetime, Pratchett wrote more than 70 fantasy novels that are famous all across the world.

In 2007, the author was diagnosed with Alzheimer's disease. Nevertheless, he struggled to continue his work until his death in 2015.