Mumbai Gets Back in the Groove After Flash Floods 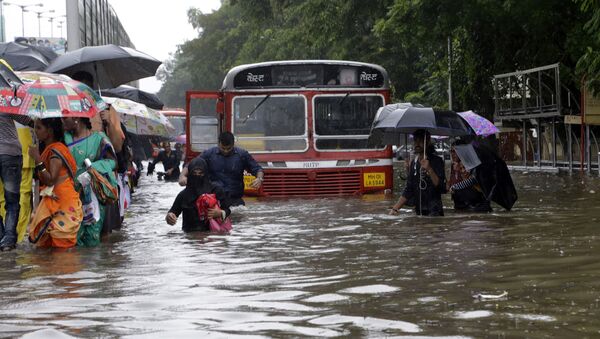 Tuesday's 316 mm rainfall revived memories of the 2005 floods that killed more than 500 people, the majority of them in shanty slums where more than half the city's population resides.

NEW DELHI (Sputnik) — India's financial capital Mumbai on Tuesday received the equivalent of nearly a month's rainfall in a single day, paralyzing the city. At least six people, including two children, reportedly lost their lives and over a dozen were reported missing as streets and homes were submerged in waist-deep mucky water.  The Indian Navy had to step in to provide relief to stranded commuters by serving food and other essentials through community kitchens.

On Wednesday, as the rainfall subsided, Mumbai limped back to normalcy as traffic and thousands of stranded commuters headed home. The suburban local train service, the city's lifeline carrying over 6.5 million commuters daily, resumed partial service. However, schools, colleges, and government offices remained closed as a precaution. The city's famous "dabbawalas" who deliver lunch boxes to more than 200,000 office-goers had to cancel their deliveries.

Meanwhile, city authorities are frantically removing cars and other vehicles left behind by their owners due to flooding of streets, running out of fuel and breakdowns which are causing traffic snarls today.

"Our first and foremost task is to clear the road traffic which is facing hurdles owing to silt and garbage which has got collected on the street at several places. People have left their cars on roads, so (removing) them is our first priority," Sudhir Naik, Deputy Municipal Commissioner, told reporters.

Mumbaikars, as people living in the city are often referred to, took out their frustration with the local authorities on social media.

Have you guys no shame? Attacking BMC during times of tragedy. They have more important things to do. Like harass radio jockeys for songs.

​Meanwhile, the weather forecast department warned that the worst is not over as it predicted heavy to very heavy rainfall in Mumbai's satellite towns and central Maharashtra in the next few days.