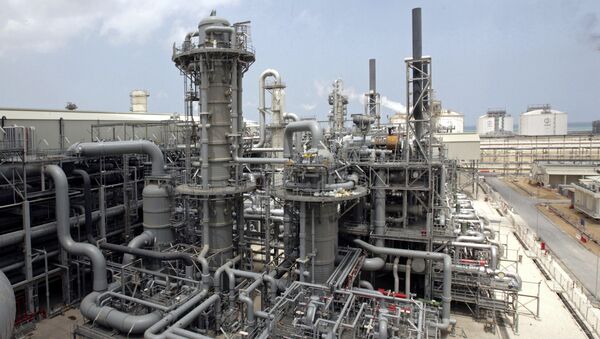 IMF has forecasted that Qatar is expected to weather a cutoff in trade with neighboring nations amid the ongoing diplomatic row.

WASHINGTON (Sputnik) — Qatar is expected to weather a cutoff in trade with neighboring nations, albeit with slower but still positive growth this year in the nation’s non-hydrocarbon gross domestic product, according to a forecast by the International Monetary Fund (IMF) on Wednesday.

"The Qatari economy and financial markets are adjusting to the shock associated with the June 5 measures imposed following the diplomatic rift with some trading-partner countries," a press release explaining the forecast said.

Four Arab States Ignore Kuwait's Proposals on Qatar Row Settlement - Doha
Moreover, the blockade of Qatar has not affected its gas deliveries, including those to the countries that are engaged in a diplomatic row with Doha, Qatar’s Foreign Minister Mohammed bin Abdulrahman Al Thani said on Wednesday.

"We respect all legal regulations with regard to signing deals and we have not suspended the gas deliveries including those to the states that organized the blockade. That is yet more proof that Qatar is fully steadfast to all its commitments," al Thani said after the meeting with Russian Foreign Minister Sergey Lavrov.

According to the Qatari minister, the right economic policy can minimize the negative impact of the blockade.

"We can certainly say that the Qatari people have not significantly suffered from the economic blockade. There is no shortage of consumer goods. Everything is developing stably in the financial sector. Moreover, we see that the blockade has offered a stimulus to many representatives of the financial and other economic sectors of our economy. New opportunities to develop internal economic activities have emerged," al Thani added.

The United Arab Emirates, Saudi Arabia, Bahrain and Egypt have severed diplomatic ties with Qatar and imposed a land, sea and air blockade, amid accusations that the nation supports militant Islamist groups such as the Muslim Brotherhood terror group (outlawed in Russia).