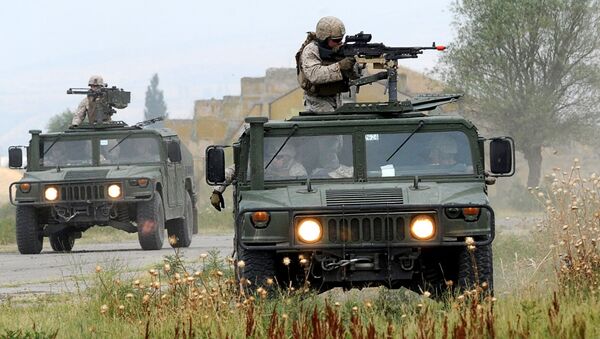 The US Department of Defense reported of about 500 military men's arrival to Georgia to participate in the seventh Agile Spirit military exercises, along with 1,000 service members from other countries.

WASHINGTON (Sputnik) — About 500 US service members have arrived in the Republic of Georgia for an annual multinational military exercise, the Department of Defense announced in a press release on Wednesday.

"This is the seventh iteration of the annually scheduled multilateral exercise designed to enhance US, Georgian and regional partner interoperability and strengthen understanding of each nation’s tactics, techniques and procedures," the release stated.

​​Units from the US Marine Corps and Army will participate in the drill, along with approximately 1,000 service members from the Georgian, Armenian, Azerbaijani, Bulgarian, Latvian, Romanian and Ukrainian armed forces, the release said.

The Agile Spirit military exercises have been held annually since 2011, reflecting a military partnership between Georgia, the United States and the North Atlantic Treaty Organization (NATO).

Initially, only US and Georgian military personnel participated in the exercise, but in 2015, they were held under the aegis of NATO for the first time, reflecting Georgia’s desire to attain full membership in the US-led military alliance.