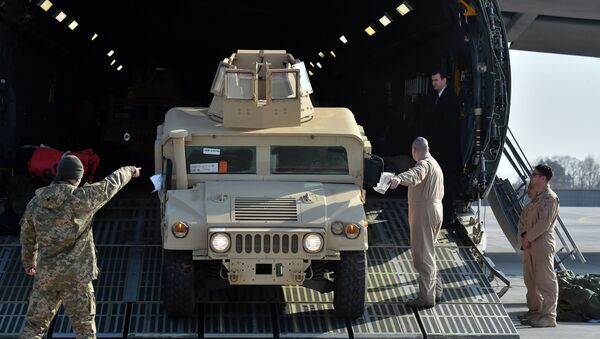 A part of military aid, provided by the United States to Kiev, has been transferred to the conflict zone in the east of the country, the Ukrainian National Guard's commander said Tuesday.

Kiev to Label Russia as ‘Aggressor’ in Donbass Reintegration Bill – Lawmaker
KIEV (Sputnik) — On Saturday, US Special Representative for Ukraine Negotiations Kurt Volker said that US Secretary of Defense James Mattis had brought defensive equipment for the Ukrainian armed forces when he visited Kiev on August 23-24. During the visit, Mattis noted that the United States has provided Ukraine with $750 million in military assistance in past years.

"This year, we have received substantial aid from the United States, a part of this aid is currently in the area of military operation in Donbas," Lt. Gen. Yuriy Allerov said, as quoted by the Ukrainian Interior Ministry's press service.

Ukraine, which has been mired in a military conflict in the southeastern region of Donbas for three years, has repeatedly asked to be supplied with lethal and non-lethal weapons from the European Union and the United States.

Russia has repeatedly warned against plans to supply arms to Ukraine, since such a step would only lead to an escalation of the conflict in Donbas. Earlier in August, Kremlin spokesman Dmitry Peskov said that all the states, especially those engaged in settling the Ukrainian conflicts, should avoid actions leading to further escalation of tensions. This standpoint has been backed by several European officials.