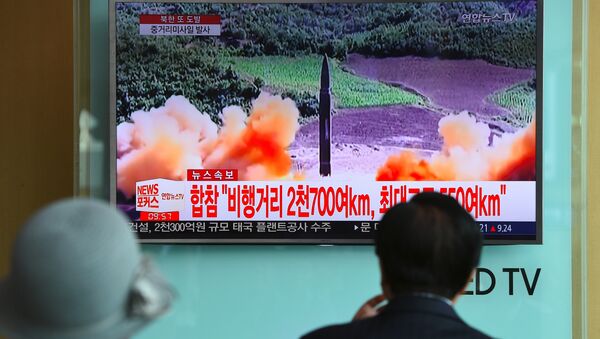 US President Donald Trump commented on the new North Korean missile launch. The comment comes amid the recent escalation of Washington's rhetoric toward Pyongyang and statements saying that a military solution is on the table.

MOSCOW (Sputnik) – US President Donald Trump said on Tuesday that the latest North Korean missile launch has signaled its contempt for its neighbors and the members of the United Nations.

"The world has received North Korea’s latest message loud and clear: this regime has signaled its contempt for its neighbors, for all members of the United Nations, and for minimum standards of acceptable international behavior. Threatening and destabilizing actions only increase the North Korean regime’s isolation in the region and among all nations of the world. All options are on the table," Trump said as quoted by the White House.

Pentagon Hopes for Diplomatic Solution on N. Korea, But Has Military Options
Earlier in the day, North Korea launched a projectile Japan considers to be the Hwasong-12 ballistic missile which flew over Japan before falling into the Pacific Ocean 1,180 kilometers (733 miles) east of Japan's northern island Hokkaido. The UN Security Council will hold a meeting on the issue as it is the second missile launch by Pyongyang in just few days.