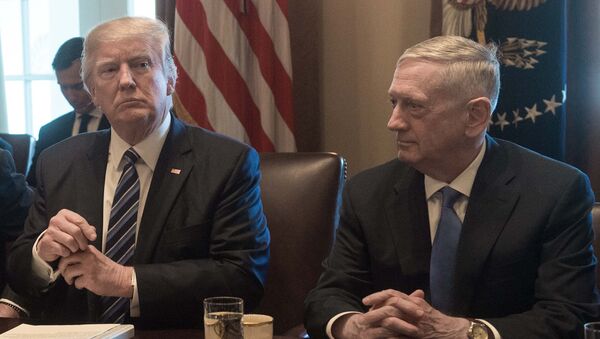 US President Donald Trump may try to put limits on the Pentagon’s bid to escalate the conflict in Ukraine in the wake of Defense Secretary James Mattis’s comments about sending lethal arms to Kiev, analysts told Sputnik.

WASHINGTON (Sputnik) — Sputnik asked experts to comment on Mattis' statement during his visit to Ukraine last week that the United States is considering Kiev's request for the supply of lethal weapons.

Russian officials warned that the US government sending arms to Ukraine at this time would likely undermine a ceasefire that recently took effect in the war-torn Donbass region.

Pentagon Chief in Ukraine: US Mulls Providing Kiev With Lethal Weapons
Independent Institute Center for Peace and Freedom Director Ivan Eland told Sputnik that while Mattis was likely speaking on behalf of a consensus among senior US military officials when it came to arming Kiev, Trump may seek to restrain the Pentagon because he has repeatedly championed restoring better relations with Russia.

"Mattis and the other generals are talking tough but would Russophile Trump go along? That is an entirely different question," Eland said.

Trump, Eland added, was probably sending a signal as a ploy, which makes sense given his professional background as a successful billionaire businessman and negotiating skills that the president himself has often boasted about.

Eland also noted that Mattis had stayed within careful parameters in his comments in Kiev during a press conference with President Petro Poroshenko, and had taken care not to hint he would supply Ukraine with weapons that could be used in wars of aggression.

"They are talking only about defensive weaponry," Eland argued.

Trump appeared to be following a pattern of threatening escalation, like he did vis-a-vis in relation to Afghanistan and North Korea, to force the other party to enter into substantive negotiations, Eland observed.

"So what is this talk about arms to Ukraine? Is it another feint? I am inclined to think so. There may even be a few token pieces of equipment sent. But I would bet that is about it," Walsh said.

Walsh also suggested Mattis’ comments could be designed to give Trump political cover from the hawks in Congress and elsewhere who were his greatest critics.

"Trump finds himself in a deeply paradoxical situation. He wants to improve relations with Russia but at the same time he must look like he is being ‘tough’ with Russia. One way to do this is to speak loudly but carry no stick or a very tiny one," Walsh said.

Trump had carried out such "feint" or "misdirection" tactics when he used cruise missiles to bombard a Syrian military airfield and then took no further action against Damascus, Walsh recalled.

"It was a pin prick really and some say coordinated with Russia. But it earned Trump wild praise from liberals and even a few neocons — but most neocons seemed to treat it as a feint and they were probably right," he said.

Ukraine's Poroshenko Wants Weaponry of '21st Century' Amid Donbass War
Firing the cruise missiles on a Syrian airfield gave Trump the political cover he needed to hold constructive talks a short while later with Russian President Vladimir Putin on the sidelines of the G-20 summit in Hamburg in June, Walsh pointed out.

Russia has repeatedly warned against plans to supply arms to Ukraine, since such a step would only lead to an escalation of the conflict in Donbass. Earlier in August, Kremlin spokesman Dmitry Peskov said that all the states, especially those engaged in settling the Ukrainian conflict, should avoid actions leading to further escalation of tensions. This standpoint has been backed by several European officials.