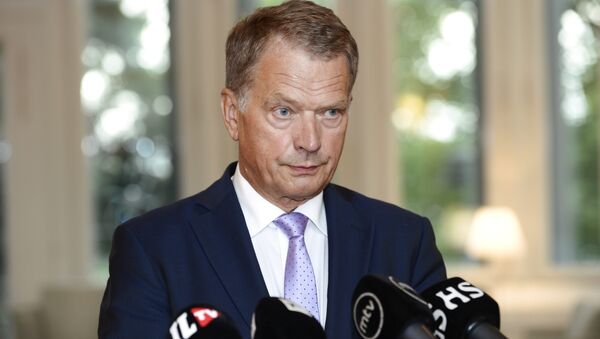 Finnish President Sauli Niinisto said Tuesday that US President Donald Trump's inaccurate statements regarding the alleged purchase of US fighter jets by Finland could be explained by the professional qualities of the US leader, who used to be a businessman before becoming a politician, local media reported.

Yet Another Awkward Moment: Trump Confuses Two Blonde Reporters in Finland
MOSCOW (Sputnik) — On Monday, Trump told a press conference that Finland planned to purchase "large amounts" of F/A18 Super Hornet multirole fighters from Boeing. Niinisto has not corrected Trump, but later took on Twitter, saying that the statements regarding the purchase of fighters were "nonsense."

According the Yle broadcaster, the Finnish president told a press conference that Trump's statements were "businessman's speeches." He stressed that Trump should have known that the negotiations regarding the purchase of aircraft had been at an early stage.

Earlier in the day, Director of the Finnish Defense Ministry's strategic procurement program Lauri Puranen said that the process of preparing for acquisition of new fighters would take years. He noted that the ministry had been choosing between a number of multirole fighter jets such as Boeing’s F/A18 Super Hornet, Dassault's Rafale, Eurofighter's Typhoon, Lockheed Martin's F-35 and Saab’s Gripen multirole fighter jet.