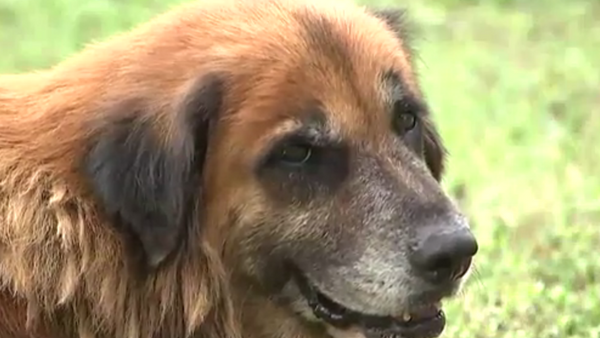 © Screenshot/NBC5-KXAS
Subscribe
International
India
Africa
Posted on Saturday, a day after then-Category 4 Hurricane Harvey struck Texas, an image of a lonely pup carrying a bag of dog food became a viral sensation that tugged on the heartstrings of many.

​But as it turns out this trickster, admired for his resourcefulness, wasn't exactly lost or packing food for the road.

According to Salvador Segovia, Otis' 65-year-old grandpa, the doggo got loose during the storm and ran over to a lumberyard near their Sinton, Texas, home, that he frequents from time to time. From there, Otis sniffed out the bag of goodies employees always kept on hand for him.

"He knew where they kept that bag behind the ice machine, so he went back there and he spotted it and said ‘well, everybody else is taking provisions, so I'm going to take my provisions,'" Segovia shared with local station NBC 5. "So he picked it up and brought it over here. That's where everyone saw him coming down the road with a big bag of dog food."

Now safe and sound with his family, the image of Otis was first shared by Tiele Dockens, a fellow Texan unaware of the six-year-old dog's bad boy side.

"It's like he's on a mission," Dockens told the Washington Post. "I just thought it was so cute."

Segovia later added that long before Otis won hearts nationwide, he was a local celebrity who used his sad face to get ice cream and hamburgers.

Otis became a member of Segovia's family roughly six years ago, after a man said he was going to leave baby Otis somewhere if he didn't find him a home.