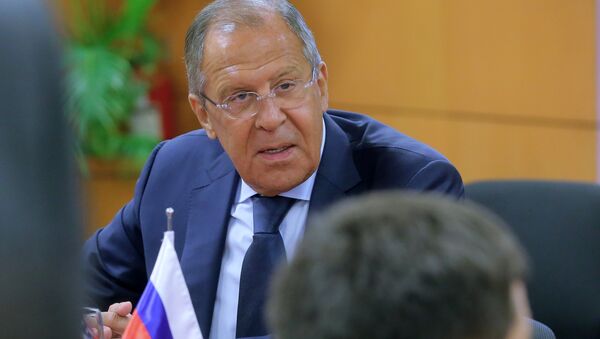 © Sputnik / Vitaliy Belousov
/
Go to the mediabank
Subscribe
International
India
Africa
Russia expresses its commitment to all the resolutions of the UN Security Council and relations with North Korea will be guided by the Council's discussions, the Russian Foreign Minister stated.

Earlier in the day, North Korea launched a missile which flew over Japan before falling into the Pacific Ocean 1,180 kilometers (733 miles) east of Japan's northern island Hokkaido. The launch was conducted at 05:57 a.m. local time (21:27 GMT on Monday). The Japanese military said the projectile was likely a Hwasong-12 ballistic missile.

"We are committed to all the resolutions of the UN Security Council, we insist that our North Korean neighbors adhere to them. We are guided by this idea in the Security Council discussions and we will be guided [by this idea] during the meeting, which is now proposed to be held," Lavrov said.