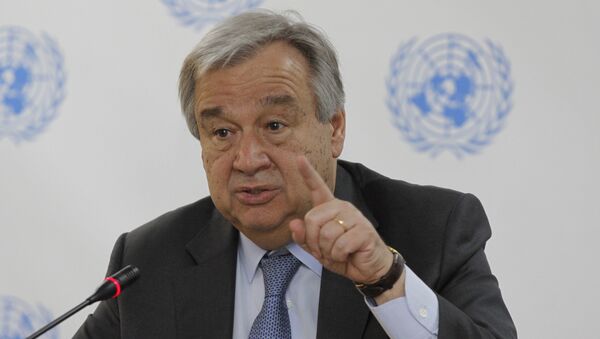 "The Secretary-General is deeply concerned at the reports of civilians being killed during security operations in Myanmar’s Rakhine State," Dujarric said on Monday. "Recognizing that Bangladesh has generously hosted refugees from Myanmar for decades, the Secretary-General appeals for the authorities to continue to allow the Rohingya fleeing violence to seek safety in Bangladesh."

Death Toll in Myanmar Anti-Police Attacks Rises to 71, Includes 59 Militants
Guterres, whose last statement on Myanmar came just last Friday, reiterated the importance of "addressing the root causes of the violence" and stressed that the responsibility for helping people in need and ensuring their security lies on the Government of Myanmar.

He also emphasized the need to grant humanitarian agencies unimpeded access to the affected communities.

More than 70 people were killed on Friday in coordinated attacks on security posts and military bases in the state of Rakhine. State Counsellor Daw Aung San Suu Kyi strongly condemned the attacks.