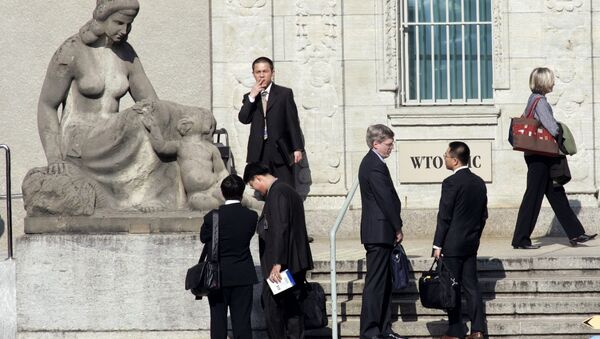 © AP Photo / Salvatore Di Nolfi
Subscribe
International
India
Africa
The global trade may grow by 2.4 percent in 2017, which is 1.1 percent more than in 2016, Director-General of the World Trade Organization (WTO) Roberto Azevedo said on Tuesday.

Russian Chief WTO Negotiator Calls New US Sanctions 'Cynical Protectionism'
SAO PAULO (Sputnik) — "In 2016, the global trade growth amounted to about 1.3 percent. That is the lowest growth since the global financial crisis in 2008. The situation improved in 2017, we expect a 2.4-percent growth," Azevedo said at the International Poultry and Pork Show.

The WTO chief pointed out that despite the increased growth, the figure would be still below 3 percent — for the sixth consecutive year.

"That is an unprecedented situation since the end of World War II," Azevedo noted.

The WTO director-general added that the economic problems were accompanied by important political challenges such as the rise of anti-global sentiments, especially in the developed countries.