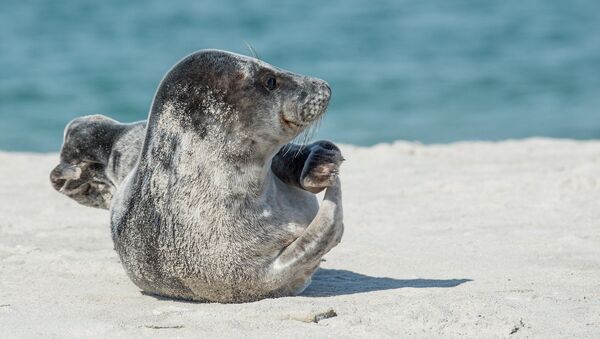 Recently, hungry and aggressive gray seals have taken to Denmark's territorial waters. The intruder population has grown drastically, which is endangering local wildlife and posing problems for Danish fishermen.

A new coordinated count carried out by the Netherlands, Germany and Denmark revealed that in just one year the gray seal population in the Danish part of the Wadden Sea has grown by almost 50 percent. Altogether, 5,445 gray seals were recorded in Wadden Sea in 2017, a ten percent increase from last year. In Denmark's territorial waters alone, 221 gray seals were sighted.

Nature-Loving Finns Going Gaga Over Fat 'Sealebrity' Flashing His Bits
This is a particularly interesting phenomenon given the fact that the gray seal has long been gone from Denmark's inner seas and only returned some 15 years ago.

"Since then, the numbers have gone up fast. Some come from the Baltic Sea, whereas others arrive from the North Sea, spreading through the Danish waters," Jonas Teilmann, a senior researcher at Aarhus University, told Danish Radio, adding that the first birth in the area was recorded a couple of years ago.

In addition to the Wadden Sea, other parts of Denmark's coastal waters, including the Limfjorden waterway and waters off Bornholm, have also seen an increase in gray seals.

While the return of the gray seal may sound like good news for the Scandinavian country's biodiversity, it may in fact prove quite the opposite. It is suspected that the spread of the gray seal is happening at the expense of other species, as the population of the more common harbor seal has reportedly ceased growing.

"We have seen examples of gray seals killing harbor seals and eating them. They are bigger and rather aggressive. We are currently investigating whether the balance between the species has been upset," Jonas Teilmann said.

Sassy Seal Gets Ejected From Swedish Town After Irking Police
The gray seal weighs up to 300 kilograms and is known to consume about five kilograms of fish per day. However, it is not averse to alternative sustenance, such as hunting porpoises and even gray seal pups.

While the balance between seal species is arguably a problem for Mother Nature to sort out, local fishermen are the ones least amused by the spike in seal populations, which have the nasty habit of undermining commercial fishing by damaging nets and feasting on the catch.

In 2016, licensed hunters and fishermen were given the privilege of shooting 40 of the otherwise protected gray seals.

According to biologist Bo Håkansson of the Danish Nature Conservation Society, gray seals pose a particular problem for fishermen due to their tendency to eat through fixed nets, which happen to be the most environmentally protective form of fishing.