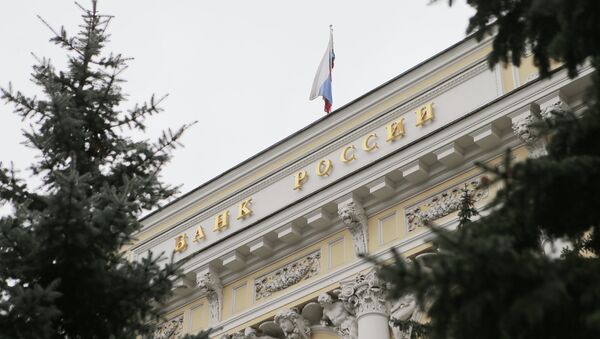 © Sputnik / Vitaliy Belousov
/
Go to the mediabank
Subscribe
International
India
Africa
The Bank of Russia has launched bailout procedures for Otkritie Bank and appointed a temporary administration to manage this bank from August 29, the regulator said on Tuesday.

Russia's Sberbank, Yandex Creating Joint Venture, Bank to Invest $500 Million
MOSCOW (Sputnik) — "According to its Order No. OD-2469, dated 29 August 2017, and pursuant to Articles 189.25, 189.26, 189.31 of Federal Law No. 127-FZ, dated 26 October 2002, the Bank of Russia appoints a provisional administration to manage the Bank. The provisional administration is composed of Bank of Russia officers and employees of the Banking Sector Consolidation Fund management company (LLC UK FKBS)," the regulator said.

At the same time, a moratorium on creditors' claims has not been introduced. The mechanism for converting creditors' funds into shares (bail-in) does not apply either, the central bank said.

Otkritie is a commercial bank that was formed as a result of the amalgamation of more than 10 banks of various sizes. The bank has over 30,000 corporate clients, 165,000 small business customers and about 3.2 million retail customers. The key shareholder of the bank is Otkritie Holding, which owns 66.64 percent of the voting shares. According to the RIA Rating, Otkritie was ranked eighth among Russian banks in terms of total assets, as of August 1.

Management of Otkritie Bank has been completely transferred to the Russian Central Bank with its subsequent entry into the capital as the main shareholder, the regulator said.

The regulator noted that Otkritie would continue to work as usual, providing services to all categories of customers and counterparties, fulfilling its obligations in full, servicing deposit and settlement accounts, making new transactions, including borrowing and lending. The Bank of Russia will provide financial support to Otkritie, guaranteeing the continuity of its activities.

The bailout process will take six to eight months, the regulator said. "The process of financial recovery using the funds of the Banking Sector Consolidation Fund can be provisionally divided into two stages, the implementation of which is estimated to take six to eight months, after which the bank will work in compliance with all mandatory standards. For comparison: the credit scheme of bailout may take 10 to 15 years," the central bank noted.

WHAT ARE THE REASONS?

The acquisition of the Rosgosstrakh insurance company by Otkritie has become a catalyst for the deterioration of the bank's condition, Tulin said.

"Rosgosstrakh is not the only reason, but it was a kind of trigger, which served as a catalyst for the process, brought this event closer. In fact, the bank's expenses for financing this activity far exceeded the expectations of the Otkritie group's owners. The bank spent a fair amount of its liquidity for this purpose," Tulin explained.

Tulin noted that the deal had put the bank in a vulnerable position. "It became clear that the owners of the bank will have to recognize the fact that the regulatory capital has been reduced to the regulator and to external auditors sooner or later, and before the rating agencies, and that has happened," Tulin added.

"Another strategic weakness of the group — it is not entirely successful bailout of Trust Bank, in general, here we have a case where bailout has created certain problems of the special administrator," Pozdyshev said.

Bank of Astana May Launch SPO at Moscow Exchange in September – Underwriter
In December 2014, Russian Central Bank decided to start the bailout of Trust. Otkritie Bank was chosen as the special administrator and received 127 billion rubles ($2.24 billion at the time) for Trust bailout. However, at the end of 2015, Otkritie appealed to the Deposit Insurance Agency for additional funding of about 50 billion rubles in the light of the fact that the "gap" in the bank's balance sheet was greater than previously thought.

Problems of Otkritie Bank, associated with capital overvaluation and high risks, have been known to the central bank since the fall of 2016, Tulin said.

"At the level of professional judgment, here at the central bank, we identified the main problems of the bank, in fall last year, as well as possible ways of solving these problems and the risks that accompany it. In any case, we were going to seek from the management of the bank, its owners either additional capitalization, or reduction of operations, so that they become adequate to the amount of capital," Tulin said.

Tulin reminded that Otkritie group had grown very rapidly in all respects in recent years, including through mergers and acquisitions, and this process was financed by borrowed funds, when the main risks were taken by the bank.

The rights of the current shareholders of Otkritie will be restored after the withdrawal of the temporary administration, but their share in the bank will not exceed 25 percent, the Central Bank of Russia said.

"After the end of the temporary administration, the rights of existing shareholders are restored, while the proportion of ordinary shares of the bank that they continue to own can not exceed 25 percent," the materials say.

During the work of the temporary administration, the bank's authorized capital is adjusted to the size of its own funds, and in case they are negative, the authorized capital is reduced to one ruble. In the latter case, the current shareholders completely lose their ownership, the regulator specified. At the final stage of recovery, the administration plans to convene an extraordinary meeting of shareholders, where it will decide to create new management bodies, after which its work will cease.

Eurasian Development Bank May Pick Up Projects Ceased Over Anti-Russia Sanctions
That were the owners of the Otkritie Bank that appealed to the central bank with a request for its bailout through the Banking Sector Consolidation Fund, Tulin noticed.

The first deputy governor of the central bank noted that the current owners and management of the bank were actively and constructively cooperating with the regulator and would also cooperate with its interim administration.

The central bank's decision to start bailout of Otkritie does not mean the clearance of the bank, it is about continuity and its development, Tulin explained.

"It's not about a surgical operation, the cleaning up of a financial group or a bank — it's about continuity in the management and development of the bank and the group with a new owner," he said.

The first deputy governor stressed that during Otkritie bailout, its best staff will be retained, activity will be maintained, and development of potential advantages will be ensured.

"The bank has a good platform, an IT platform, which we intend not only to maintain, but also to continue its development," Tulin added.

He also confirmed that the bank's shareholders appealed to the Central Bank for support. "The transfer of Otkritie under the management of the Central Bank was the result of a productive dialogue between its owners and the regulator," he said.

"For the customers nothing changes, the bank will continue to fulfill all the obligations in full. Separately, I emphasize that it is related to deposits as well — they are kept in full and are serviced in the usual manner," the bank's managing director said.

"All this also applies fully to the organizations of the Bank's group: Trust Bank, Rosgosstrakh Insurance Company, Rosgosstrakh Bank, Lukoil-Garant, Electric Power Industry and RGS pension funds, Otkritie Broker, Tochka and Roketbank services. "All of them continue to work in a normal mode and serve customers," Dmitriev said.

The central bank's decision to improve the financial stability of Otkritie using the money from the consolidation fund is positive, President of the Association of Russian Banks (ARB) Garegin Tosunyan believes.

"Any measures aimed at increasing sustainability are extremely positive, I always support such measures, unlike measures that are aimed at license withdrawal or creation of administrative safeguards," Tosunyan said, answering the question how he evaluated the decision of the Russian Central Bank in respect of the Otkritie Bank.

The Bank of Russia does not expect shocks in the Russian banking market in the foreseeable future, Tulin said.

"We do not expect any shocks in the banking sector of the economy in the foreseeable future," he stressed.

The financial recovery of Otkritie will increase the reliability of the Russian banking system, and certainly will not worsen the situation, the central bank's first deputy governor said.